Wolverines shot down in second half 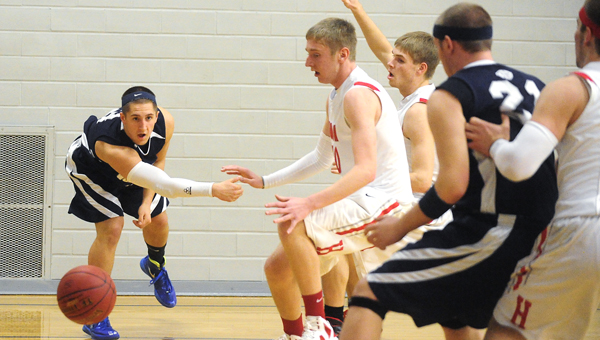 Brandi Hagen/Albert Lea Tribune Derek Olson makes a pass to Trenton Thoms on Friday during the Glenville-Emmons game against Houston.

GLENVILLE — It was the end of a four-game winning streak for the Glenville-Emmons boys’ basketball team (9-5) as they took a loss to Houston (13-3) on Friday 34-25.

Houston had an 8-2 lead after the first three minutes of the game. After two baskets by the Wolverines’ Wyatt Madson and one by Derek Olson, the game was tied 8-8 with 13 minutes and 40 seconds remaining in the half. 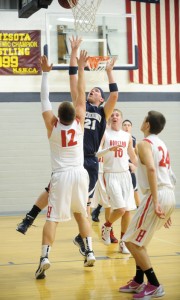 Brandi Hagen/Albert Lea Tribune Trenton Thoms takes a shot at the basket on Friday. Thoms scored seven points for the Wolverines, had four rebounds and one steal.

Madson scored at 11:23 giving the Wolverines their first lead 10-8.

The Hurricanes’ Mitchell Beckman and Troy Sires each scored with less than 11 minutes to go, taking back the lead 12-10.

The Wolverines took the lead 15-13 for the second time with just under three minutes remaining.

With a 3-pointer by Olson at the halftime buzzer, the Wolverines had gained a 20-14 lead.

“We dominated in the first half, we played as good as we possibly could defensively,” Wolverines coach Dan Fredrickson said. “Offensively, when they were playing man-to-man and their big guy got in foul trouble at nine minutes, we need to be able to pound the ball inside a bit more.”

Fredrickson said if they would have taken advantage of the foul trouble, they could have extended their lead, which would have made a huge difference in the second half.

Unfortunately for the Wolverines, just a minute into the second, the Hurricanes’ Tyler Peplinski made a 3-pointer which was followed by two more Hurricane baskets.

After free throws by Trenton Thoms at 12:49, Glenville-Emmons tied the game and took the lead for the third time.

In the final seven minutes, Houston went on an eight-point run. Thoms scored on a free-throw at 1:23, but Houston scored the last two points of the game at 1:08 for their 11-point lead.

“It was just a rough, rough night shooting for us,” Fredrickson said. “Their 1-2-2 zone kept us out of rhythm and we settled for jump shots instead of being able to create our own shots and attack the basket.”