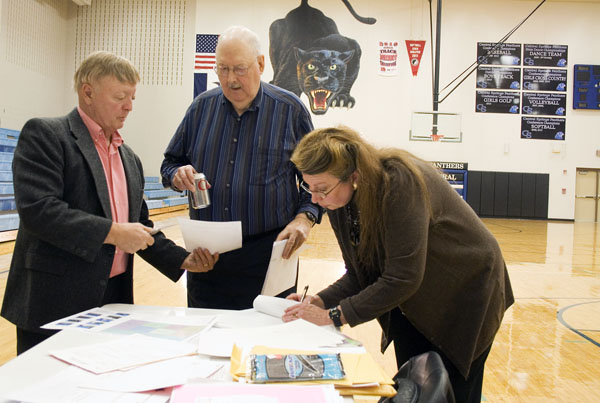 MANLY, Iowa — Worth County Republicans followed suit with the rest of the state Tuesday in Iowa’s presidential caucuses, selecting Rick Santorum and Mitt Romney as their top two candidates.

Santorum, a former Pennsylvania senator, led the county’s paper-ballot vote, receiving 46 out of 188 votes, according to unofficial results. 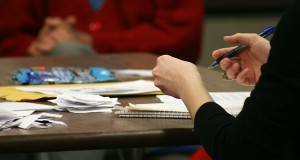 “Old-fashioned getting out and meeting the people worked,” said Santorum supporter Ron Rachut of Fertile, after hearing the results.

Rachut said he started out as a supporter of businessman Herman Cain, but after Cain was out of the race, he saw Santorum on TV during a town hall meeting and was impressed.

He said it paid off for Santorum to spend as much time as he did campaigning in the state. He traveled to all of Iowa’s 99 counties.

Gorball said Santorum connected well with voters when he took his message around the state. 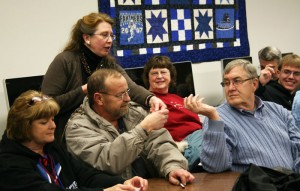 Colleen Lawyer, secretary for the Worth County Republican caucus, hands out ballots Tuesday to voters in Precinct 3-1, which covers Northwood and three other townships in Iowa. -- Sarah Stultz/Albert Lea Tribune

The Iowa caucuses marked the first major electoral event leading up to the election for president.

In Worth County, voters met at the Central Springs School in Manly. People who were registered to vote as Republicans and who would be 18 by Nov. 6 could participate. All others could observe.

The evening started off with the caucus at large, by electing a caucus chairman and secretary as an entire county. Then, one person for each candidate was given the opportunity to advocate for their candidate.

Kensett man Dave Irons advocated for Minnesota’s Michele Bachmann, calling her a “consistent conservative” who has high ratings from the National Rifle Association.

Ed May of Fertile spoke out in favor of Gingrich, who he said he thinks is the most conservative of the candidates with the most experience in Washington. 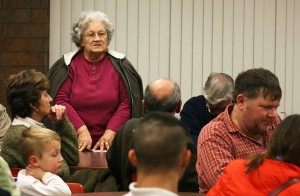 Juanita Davidson advocates for presidential candidate Newt Gingrich Tuesday night during an Iowa precinct caucus for Republican voters from the city of Northwood and the townships of Deer Creek, Grove and Hartland.

Hanlontown farmer Clayton Rye talked about supporting ethanol and said he thought Romney was the best qualified, most capable candidate of beating President Barack Obama in the November election.

After the advocacy period, the crowd divided into their precincts, where they repeated the same steps, just on the precinct level. Voters also elected committee members and delegates to the county convention.

Using a paper ballot, each registered voter scribbled the name of the candidate of their choosing.

The secretary for each precinct then tabulated the votes, before bringing their totals back to the overall caucus secretary to be tabulated for the Worth County results.

Many people left after casting their votes, though a few stuck around to hear the countywide results. 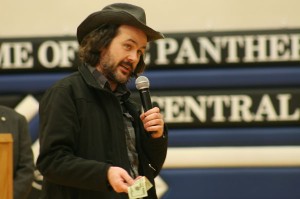 — Unofficial results from the Worth County Republican Party