2 perish in crash in Mower County 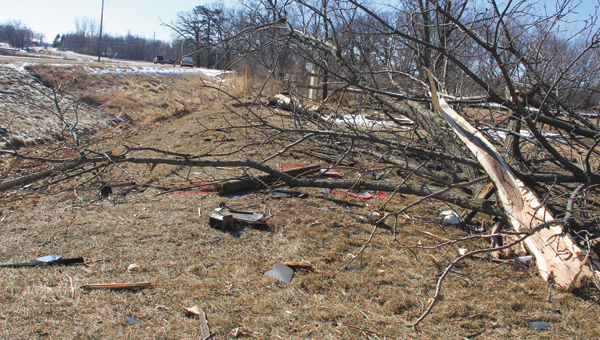 A tree was toppled and a power line knocked down when a car drove off County Road 29 on the south side of Austin early Saturday morning, killing two and injuring a third man. -- Jason Schoonover/Albert Lea Tribune

AUSTIN — At least two men are dead after a car crash on the south end of Austin.

Mower County sheriff’s deputy Tom Mensink confirmed Saturday the one car involved was traveling northbound on Fourth Street Southeast between 1:30 and 2 a.m. when it drove into the west ditch near a curve, hit a fence, severed a telephone pole and snapped a tree.

“We believe speed may have been a factor,” Mensink said. He said the Minnesota State Patrol performed accident reconstruction tests at the scene Saturday.

Another male passenger was injured in the crash, but his condition was not immediately known this morning at the Tribune’s press time. Police have yet to official release the names of those involved in the crash.

The car came to rest between two trees in Marsha Downey’s yard, 2810 Fourth Street SE. Downey said she awoke around 2 a.m. to emergency officials in her yard who stayed investigating the scene past sunrise.

Memorial services for Moe will be at 11 a.m. Tuesday at Our Savior’s Lutheran Church in Austin with the Rev. Glenn Monson, officiating. Visitation will be from 4 to 7 p.m. today at the Worlein Funeral Home and for one hour prior to the service at the church on Tuesday.

Funeral services for Unverzagt will be at 10:30 a.m., Wednesday at St. Olaf Lutheran Church in Austin with the Revs. Kristi Koppel and Jonathan Unverzagt co-officiating. Interment will follow the service at Oakwood Cemetery in Austin. Visitation will be from 4 to 7 p.m. Tuesday at the Worlein Funeral Home and for one hour prior to the service at the church on Wednesday.