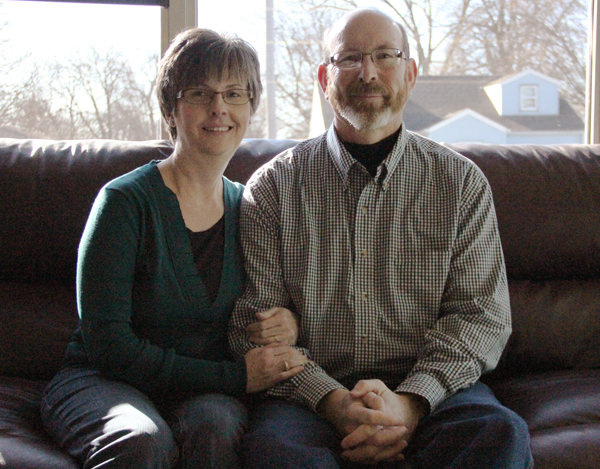 Steve and Lisa Hill are the winners of the Tribune’s Romancing the Heart contest. They’ve been married for 30 and say their faith has kept their relationship strong. -- Kelli Lageson/Albert Lea Tribune

WELLS — A Wells couple has been married for almost 30 years and says faith has helped the marriage stay strong over the years.

Steve and Lisa Hill live in Wells but met in Fairmont at a volleyball party at Steve’s house in 1980. Lisa didn’t know Steve, but that didn’t stop him from teasing her for not joining in a volleyball match.

“He gave me such grief for sitting out,” Lisa said with a laugh.

“He basically pulled me around the place,” Lisa said. “But then we starting talking and kept skating around.”

Soon after he asked her to go on a date, and she agreed. Their first date was on Feb. 13, 1982. They went to see the movie “Taps” and to eat at a burger joint called 1896 in Fairmont. Lisa remembers that he brought a deck of cards and they played together in the restaurant. Then when he took her home, he said she practically jumped out of the car before it was parked. They kept dating, and Steve proposed on May 1 of that year. They were married in September.

“We’d known each other for about two years,” Lisa said.

Fast forward 30 years and they’ve settled in Wells. Steve drives semitrailers for Wantonwan Farm Service, and Lisa is a bookkeeper. They have two children. Luke, 28, lives in Seattle, Wash., with his wife, Caitlin. Sarah, 26, lives in Salem, Ore., with her husband, Nick, and daughter, Claire.

Steve and Lisa said they enjoy traveling to the West Coast to see their children and grandchild.

“We’re really blessed — we have a couple of great kids,” Lisa said.

They also enjoy walking in nature and state parks, and Steve likes to take photos on some of those nature walks. Canoeing, gardening and watching movies are other pastimes they enjoy. They also still enjoy attending Bible study together.

“For us, our faith is extremely important,” Lisa said. “It’s part of why I fell in love with Steve.”

Steve agreed and said it’s important that they share many of the same values.

“One of the big things is to say you’re sorry and ask for forgiveness — with your partner and God,” Steve said.

Though they’ve had their fair share of ups and downs with various situations in life, they’ve been able to handle everything together. Lisa said that while she loved him on their wedding day, she never knew she’d love him more than that.

“I think our love has just grown way beyond that,” Lisa said.

Steve and Lisa Hill won the Tribune’s Romancing the Heart contest and their submitted story was published Feb. 7. They won a $50 gift certificate to Crescendo in Albert Lea.