A young man on a mission

A 19-year-old Albert Lea man is excited to head to Egypt, Israel and Jordan to fulfill his goals of preaching and spreading Evangelism. 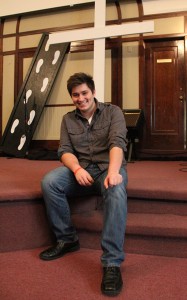 Elisha Marin, son of local pastor George Marin, is the youth minister and worship minister at Grace Christian Church in Albert Lea. He said he enjoys going on mission trips to places that aren’t necessarily considered tourist-friendly like when he went on a mission trip to the Balkan region of Europe.

Marin said these mission trips aren’t like more traditional trips where Christians might go in larger groups to help build infrastructure or volunteer. He likes to go alone or in small groups to preach and sing and pray for people. The upcoming mission trip will be in conjunction with Youth With A Mission.

He said he’s done mission work locally and in the United States but said the international work is where he can do more in-depth work.

He’ll leave March 7 and be gone for about three weeks traveling to the three countries. He said that there is usually some culture and language barriers when traveling internationally.

“But the message I have to share is very universal,” Marin said.

He understands that there might be situations where he’ll have to adapt, but he’s prepared to do that. He gave the example of helping some new travelers go through customs coming back from Macedonia. He also led a trip to go preach in a gypsy village when he was just 17.

On that trip he unfortunately got food poisoning and was subject to some questionable medical care — the only kind available. While he was in a hospital room that had about 20 beds, most of them without mattresses, he preached to two Muslims. He said that even though he was very ill, he was thankful for the opportunity to preach.

Marin said he feels the need to travel and preach and that it will likely be something he wants to do regularly in the future.

He does want to stay in southern Minnesota though because he enjoys the work he does at Grace Christian Church. He’s also training to eventually be an emergency medical technician.

“We have it good here in Albert Lea,” Marin said.

More information can be found at www.facebook/ipadraffle or by calling 507-473-0376. The winner will be announced Feb. 26.

Marin said he’s looking forward to the trip, because he likes being able to learn about different cultures.

Marin mentors groups and works at Grace Christian Church throughout the week. Sunday worship is at 10 a.m., at 7 p.m. on Wednesdays there are classes and at 7 p.m. on Fridays the church is open for local youth.