The Albert Lea FFA was named champion at the Sioux Empire Farm Show in Sioux Falls, S.D., on Jan. 28.

Chapters from three different states sent teams of four to participate. Senior Grady Ruble was the captain for Albert Lea and worked together with junior Tyler Enderson and sophomores Riley Ruble and Tyler Trihus.

Albert Lea’s coach Greg Gosen said the livestock team has had top 10 finishes at the Sioux Empire show before, but never the champion title. 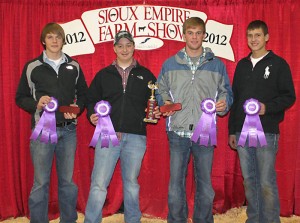 “It’s so difficult to do,” Gosen said. “Especially with all four students. If just one student falters we don’t win it. We might even fall out of the top 10.”

Placings at judging shows are awarded to teams and individuals.

As a team, Albert Lea competed against 46 others. In the individual portion, there were 237 students competing. In both categories, the top 10 places were awarded.

Not only did Albert Lea win champion as a team, but Grady placed ninth in individuals and Riley placed 10th.

Gosen estimates the students have spent more than 200 hours this year just preparing for shows.

“It’s a year-round commitment that these kids make,” Gosen said.

Gosen estimates the livestock team participates in 15 contests a year. To prepare, they visit local farms and spend time in a classroom looking at photos and watching videos to practice analyzing beef, sheep, swine and goats.

During judging shows, students observe animals and score them based on specific qualities. Their scores are compared to those of an official judge. At the Sioux Empire show, the official judges are made up of South Dakota State University students and faculty.

“These kids have hit most of their classes,” Gosen said. “That tells you they have a very good idea what industries are looking for when they’re trying to produce animals.”

Gosen said being able to judge an animal’s qualities accurately is a lifetime skill.

“The better product we can produce as livestock producers, the more product and better quality product the consumer will have,” Gosen said.

Gosen said he especially likes when the students disagree with him during practice. It tells him they are growing and seeing classes how they should be.