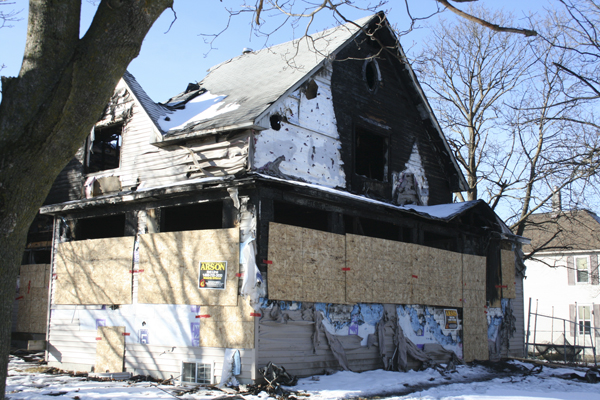 ELLENDALE — Investigators are asking for the public’s help in a case they suspect is possibly arson.

They have posted signs that declare a house that burned twice on the same December morning as a suspected arson. The house is at 403 Fifth Ave. W. in Ellendale and belongs to Mark and Sara Misgen, owners of Maggio’s Pizza, a business just blocks down the street from the home. 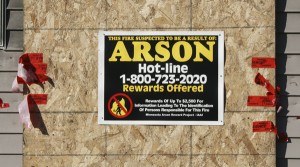 A sign proclaims that rewards are offered to anyone who has information on the suspected arson at an Ellendale home that burned twice on the morning of Dec. 7.

State Fire Marshal’s Office spokeswoman Kristine Chapin confirmed that her office posted the signs, after collaborating with the other investigating agencies.

“It doesn’t mean it is an arson,” she said. “It means they are asking for the public’s help.”

The signs say a reward of up to $2,500 is offered for “information leading to the identification of persons responsible for the fire.” The Minnesota chapter of the International Association of Arson Investigators handles the reward procedures. 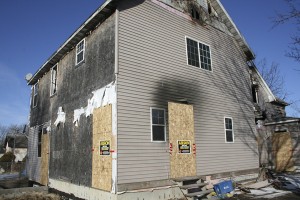 Neighbors still have to look at the burned-out shell of the home the the Mark and Sara Misgen family used to reside before it burned Dec. 7. It remains the scene of an investigation.

Arson cases often are hard to solve and can remain open for a year or more. Conviction rates are low, largely as a result of the evidence being destroyed by fire.

The Ellendale house burned twice on the morning of Dec. 7.

The first fire began in the kitchen shortly before 2 a.m., when one of the homeowners came home and saw smoke. Ellendale firefighters extinguished the fire, ventilated the house and deemed it safe before turning it back over to the homeowner.

Shortly before 4 a.m., a passer-by reported a second fire. When Ellendale firefighters arrived, the house was engulfed. It took four hours to put out, and no one was injured.

Investigators have not stated that Mark Misgen’s felony conviction of creating fake credit cards from two years is connected to the fire, but they are aware that Misgen was struggling to pay restitution. Misgen pleaded guilty on April 28, 2009, to receiving stolen property.

Dakota County court files say he and an accomplice made fake credit cards using the card numbers of customers, then purchased $20,000 in gift cards, electronics and other goods in Burnsville in November 2007. The files said the six victims had done business at M&S Auto in Ellendale, another Misgen business.

He violated the terms of his probation in September by failing to pay his restitution and garnering more than one traffic violation. He had paid $2,170 and had $3,415 left.

In December, a judge ordered the same probation terms to continue. On Thursday, a collection agency submitted a payment of $55.10 to the court it had gathered from Misgen.

Ellendale City Administrator Steve Louks said city officials continue to wait on the investigation before any action can be taken regarding the burned-out structure.

Steele County Sheriff Lon Thiele could not be reached.

Man held on charges and other reports