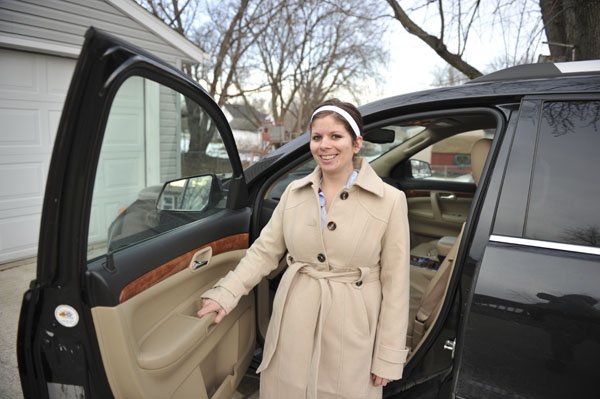 Dawn Kruse, a teacher and basketball coach in Albert Lea, makes the daily commute back and forth each weekday from her northwest Austin home. - Eric Johnson/Albert Lea Tribune

It’s just a short distance between Austin and Albert Lea, only 22 miles. The communities have shared many things over the years, whether it be business, eventual biking trails, even school funding. The towns share something more, in the form of hundreds of residents who wake up in one place to go work in another every day.

The twin towns have their fair share of commuters, a trend here to stay according to city officials. Commuters between Albert Lea and Austin haven’t changed much over the past several years in spite of rising gas prices and a spastic economy. About 485 Austin residents commuted to Albert Lea in 2009, and about 551 Albert Lea citizens went to work in Austin that same year, according to U.S. Census data.

“Those numbers are pretty consistent with what we’ve seen,” said John Garry, executive director of the Development Corporation of Austin. 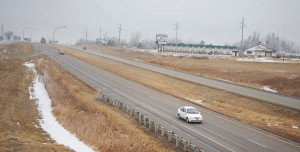 For many Austin and Albert Lea residents, Interstate 90 is a familiar road as they travel it back and forth each day for work between the two cities.

Garry said the trends indicate Austin has a healthy mix of residents and workers coming into town to work, which means they’ll also contribute to the local economy through utilizing businesses.

What’s more, about 4 percent of Austin’s and Albert Lea’s workers lived in the opposite community between 2002 and 2009, according to Garry.

“These numbers really show how interdependent the cities are for a workforce and workforce is such a significant part of everyone’s economy,” he said. “We need each other.”

Mark Stotts knows all about helping Austin’s economy. As the finance and operations director of Austin Public Schools, Stotts spends much of his day in Mower County. Though he and his wife live in Albert Lea, they go to Austin for shopping, whether it’s picking up groceries or dining.

“I feel like I support the Austin economy more than the Albert Lea economy,” Stotts said.

Stotts and his wife both grew up in Albert Lea. They still have family in Freeborn County, and though they’ve moved away to places like Duluth, the Twin Cities and Kansas City, Mo., they’ve always returned to southern Minnesota.

“We were pretty established in Albert Lea,” Stotts said.

They’ve stayed in Albert Lea since 1993, when Stotts was hired to be the finance director for Albert Lea Area Schools. He worked there for 12 years before pursuing another finance and operations job in Burnsville in 2006. They didn’t move to the metro area, however, which meant a 70-minute drive to work every day.

“My wife has a job in Albert Lea that she really enjoys, and she didn’t have an interest in leaving her job,” Stotts said. “We have family in the area, we grew up in the area, and we just enjoy living there.”

The daily journey to Burnsville took its toll after a couple years, as Stotts would have night meetings at least twice a week, which meant returning home at 10 or 11 p.m. just to wake up at 5 a.m. and start all over.

That’s why he jumped on the chance to work in Austin, where he is currently in his third year as head of the district’s finances and operations. The commute is much more enjoyable for him.

“This commute to Austin for me is the perfect commute,” Stotts said. “It takes me about 20 minutes, gives me a chance to have my coffee on the way over.”

What’s more, the commute is a little easier on his gas tank. Stotts said he used to spend about $5,500 on gas a year when he worked in Burnsville, but he currently spends about $2,300 in gas a year, or about $45 a week.

Stotts isn’t the only one who enjoys a shorter commute. The average person travels about 23 minutes to work each day, according to American Community Survey data.

Dawn Kruse knows all about the Austin-Albert Lea commute, too.

Kruse drives 50 miles round trip, five days a week, to teach at Albert Lea High School. Unlike Stotts, Kruse has never had to contend with a longer commute, though. She’s not sure if she would drive much farther to a job than she currently does.

“I’m glad at this point that I’m not driving any farther than I am,” she said.

Kruse has lived in Austin for nearly six years, and her husband works in the Hormel Corporate Office. They’re situation is the same as the Stottses, as one commutes while the other remains in the hometown. The Kruses are happy with their living arrangement and have no plans to move closer to Albert Lea. Twenty-five miles of driving in the morning and afternoon doesn’t bother Kruse. Furthermore, she hasn’t noticed too much of a burden with gas prices, especially since her husband’s short commute eases the costs.

“It hasn’t been too terrible,” she said. “And it’s a pretty easy drive, so it has worked out,” she said.

Even if costs aren’t that bad, Kruse and others are taking the high road, or so to speak. For about a year, Kruse has been carpooling with co-workers. She is aware of at least five other Albert Lea teachers who live in Austin, and some of them share driving responsibilities several times a week. Kruse hasn’t recorded the savings and may not notice spending less from day to day, but she knows the savings are significant over the course of a year.

“It definitely helps, helps for sure,” she said.

But carpooling isn’t always an option. And since Kruse has been traveling the same route, five days a week, for five years, the routine is easier than when she started. The everyday repetition makes her commute seem shorter than it actually is.

“From door to door, it takes me about 22 to 25 minutes, depending on weather,” Kruse said about her actual commute time. But like nearly all Minnesotans, Kruse has fallen victim to the weather, as well. It’s the only major problem she has ever had in her five years of commuting, and it happened not long into her routine — her first or second year teaching in Albert Lea, she suspects.

“There was a line of us following each other and we ended up stopping at the Hayward Rest Stop,” Kruse said about the blizzard that created awful driving conditions.

Even if Kruse has major car troubles, she’s not far from co-workers or her husband for help. Furthermore, she doesn’t have to commute to Albert Lea in the summer when school is out of session. Because of that, she can spend more time at home with her 2-year-old son, as well.

That’s good for Kruse because she likes to spend time in Austin, just like the Stottses

“I like to do stuff in Albert Lea, but we spend most of our time in Austin,” Kruse said.

Regardless of which town offers a better business or residential scene, Stotts, Kruse and others are proving a common theme: If commuting between Albert Lea and Austin was ever a burden, that is no longer the case.