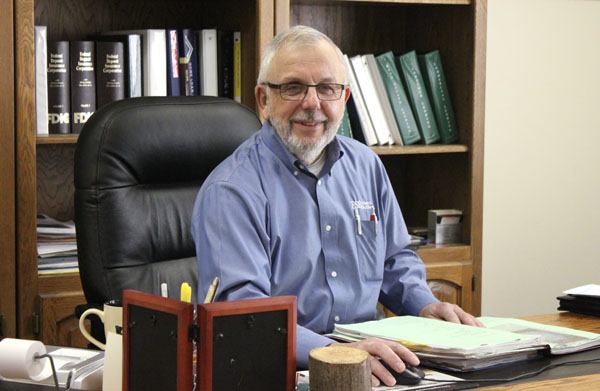 Mark Nowak remembers fondly a day more than three decades ago when an 18-year-old in a jacket and blue jeans drove a small motorcycle to his office asking for a farming loan.

Nowak isn’t exactly sure the date, but it was sometime in the late 1970s or early 1980s. The young man, who Nowak preferred not to name, wasn’t raised on a farm and didn’t have family in the business, but he had been walking bean fields for a local farmer and really enjoyed it.

For some reason, Nowak said, he had such a belief in the young man, and he knew he would work hard. So he lent him money for 80 acres and a tractor, and over the next 30 years, Nowak said, the man created a successful, fulfilling farm business.

Nowak, now a senior loan officer at the Freeborn branch of Farmers State Bank of Hartland, said that story and many others like it are why he got into the farm lending business. Driving through the country with his wife, Lea, Nowak said he likes to point out family farms he made possible by approving their loans.

“I take a lot of pride in being able to help and reach out to a lot of people,” he said. “You get to see a lifetime and multigenerational benefits of your accomplishments.”

Nowak’s other passion is his 500-acre farm near Wells. It’s partly because of his farming that he’s had a successful, 45-year career as an agricultural lender, which in turn is why his colleagues nominated him for the Independent Community Bankers Association’s “Excellent Lenders” honor.

Nowak discovered in May 2011 he was one of five lenders nationally recognized in the July 2011 Independent Banker magazine.

“It’s a big industry,” Nowak said. “I was just overwhelmed that I was nominated, and then to get it, I was pretty awed by it.”

Nowak attributes his success to farmers who want to deal with lenders who are well-connected.

“I’m not smarter than most people, but I’ve had 45 years of experience and my ag roots are deep,” he said.

Nowak started his career in 1968 after receiving a Bachelor of Science degree in animal science and agricultural economics from the University of Minnesota. He’s been in Freeborn County since 1972, and has worked at Farmers State Bank of Hartland since 2001.

Farmers State Bank’s agricultural clients are family-run farms averaging 800 to 1,500 acres. The bank, which has locations in Hartland, Freeborn and Albert Lea, has a loan volume of around $70 million, of which Nowak handles $40 million.

“Mark is one of the best lenders around,” colleague Daniel Otten said.

Otten, who has worked with Nowak since 1992, said a lot of Nowak’s customers have stayed with him for 40 years, even as he has worked at different banks.

“They moved along with him, and that’s very unusual in today’s environment,” Otten said. “Customers benefit because he is such a wealth of knowledge.”

Nowak said besides running his own farm, he also routinely attends farm lending conventions, talks to weather and environmental experts, and constantly reads up on anything related to his field, including genetics, climatology, technology and politics.

“Being an expert in many of those areas is what makes him special,” Otten said.

“I think Mark’s passion for ag and lending makes him a very unique individual, and his dedication and hard work over the years make him outstanding,” she said. “He loves farming and he has a great gift of working with numbers.”