Logan Ausen, 15, has earned the highest advancement award the Boy Scouts of America offers to Scouts, the Eagle Scout Award. Ausen was recognized at an Eagle Scout Court of Honor held on Nov. 12, 2011, at Christus Victor Lutheran Church in Apple Valley. 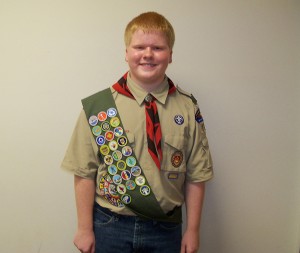 Logan Ausen poses for a photo.

Ausen began his scouting career as a Tiger Cub in 2003. He earned the Arrow of Light, Cub Scouts highest honor, as a member of Pack 116 in Farmington. He also earned the Super Achiever Award for earning all 20 Webelos activity pins.

As a member of Boy Scout Troop 119 Farmington, Ausen served as Troop Scribe and Patrol Leader. A highlight of his Boy Scout experience was to be chosen by his peers to be a member of the Order of the Arrow and he earned Ordeal in September 2011. Ausen earned 26 merit badges on his way to Eagle.

For his Eagle Project, Ausen chose to make a Garden Arbor Trellis Bench for Trinity Care Center in Farmington. The bench was made out of cedar and was 7 feet high and 6 feet wide with lattice on the sides. Ausen received donations from Dakota Lumber in Farmington, Menards in Apple Valley, family and friends as well as from families of some of the residents of Trinity Care Center. The project took a total of 201 man hours from the planning stage to completion.

Ausen is a member of Christus Victor Lutheran Church and is active in band and jazz band at Dodge Middle School where he is an eighth-grader. Ausen plans to continue in scouting by assisting others in obtaining the rank of Eagle.

Ausen is the son of Dan and Dawn Ausen, of Farmington, and the grandson of Carol Becker and the late David Becker Sr., of Hayward, and the late Edgar and Doris Ausen, of Manchester.