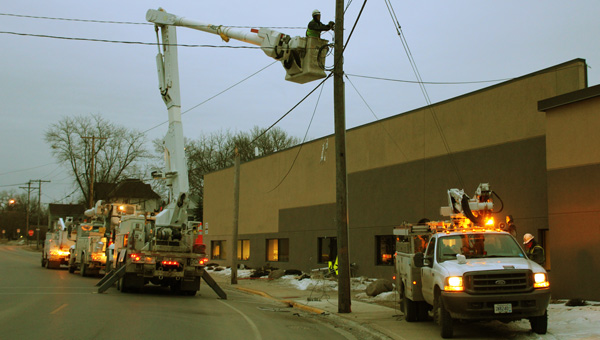 Crews from Alliant Energy work on wires at 7:15 this morning along Front Street to restore power to the surrounding neighborhood. -- Tim Engstrom/Albert Lea Tribune

A man who told police he might have fallen asleep hit a power pole on Front Street in Albert Lea this morning, knocking out power for about 70 customers.

The crashed happened at 2:54 a.m. in front of Lou-Rich, near the corner of Front Street and Euclid Avenue. Power came back on at 9:30 a.m.

The police report says Lee was headed eastbound when he left the roadway. The sport-utility vehicle initially hit a crosswalk sign, sending it through a window in the Lou-Rich building at 505 W. Front St. Then the Explorer crashed into a guide line that holds a power pole and into the building itself, the report says.

The guide line snapped, causing the top of the power pole to fall onto Lee’s Explorer and breaking power lines, the report says. Lee called 911, rather than exit his vehicle amid downed power lines.

Lee told the police he might have fallen asleep and said he was running on 90 minutes of rest.

A spokesman for Alliant Energy said power line crews had to erect a new pole and rethread the wires, after emergency responders and a tow-truck driver cleared the wreckage. He said 70 customers were affected, including the Albert Lea Tribune building.