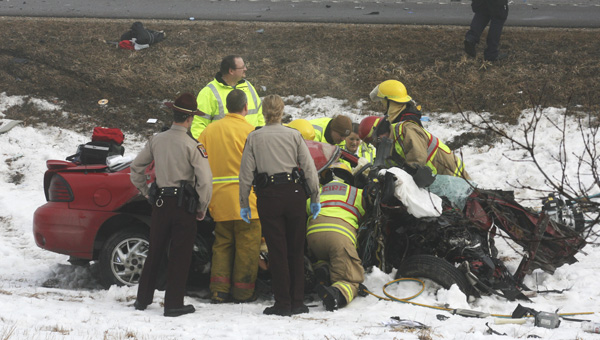 MANCHESTER — A woman is dead as a result of her car colliding head on with a semi pulling a trailer full of hogs Wednesday about three miles north of Manchester. 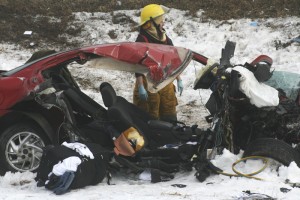 A firefighter stands at the remains of a Pontiac that collided with a tractor-trailer full of hogs Wednesday on Minnesota Highway 13 halfway between Manchester and Hartland. -- Tim Engstrom/Albert Lea Tribune

Felicity Mathieu, 27, of Alden, was extricated from the car and taken to the Albert Lea hospital in an ambulance. She died later Wednesday.

The trucker, Tye H. Kleeburger of Kasson, survived the crash unharmed, according to the Minnesota State Patrol.

The crash happened at a slight bend on Minnesota Highway 13 in heavy fog just north of gravel 280th Street. 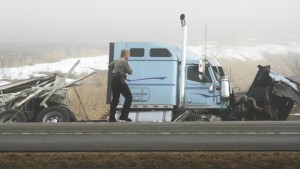 A Minnesota State Trooper looks at the damage of a semi and its trailer full of squealing hogs minutes before the trailer topped onto its side Wednesday along Highway 13. She closed the hood of the tractor just before the trailer fell. -- Tim Engstrom/Albert Lea Tribune

The State Patrol reports Mathieu’s car was a red 2004 Pontiac Grand Am headed northbound when it crossed the center line and struck a southbound blue International semi head on.

The semi and trailer belonged to Warehouse Plus, based in Oronoco. No hogs were spotted roaming the roadway. The crumpled part of the trailer was at the hitch end. The rear gates still were shut. 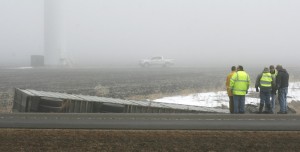 First responders and the trucker on Wednesday discuss what to do about the hogs in the trailer. In the distance is the base of a wind turbine, part of the Bent Tree Wind Farm. -- Tim Engstrom/Albert Lea Tribune

The crash happened at about 10:20 a.m. At 10:48 a.m., the askew semitrailer disconnected from its hitch and toppled onto its side, causing squealing hogs to squeal louder suddenly.

Heavy fog may have been a factor in the crash, as there was low visibility. The National Weather Service said fog was most dense in rural areas and it could create a thin glaze of ice on some surfaces. 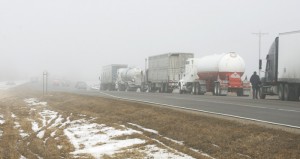 Truckers wait on Highway 13 on Wednesday for the road to reopen while the Freeborn County Sheriff's Office, the Minnesota State Patrol and fire departments from Manchester and Hartland deal with a crash ahead. This was the view from gravel 280th Street. An ambulance crew from the Albert Lea hospital already had taken away a patient. -- Tim Engstrom/Albert Lea Tribune

Both vehicles were towed to Allen’s Tow-N-Travel.