BLUE EARTH — A Ceylon man accused of breaking into a Blue Earth house and using a hammer to bludgeon his wife, her boyfriend and two younger females allegedly called 911 himself to report the brutal beatings. 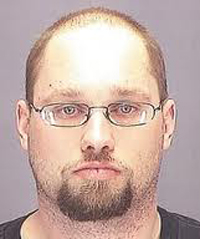 He is accused of killing 37-year-old Christopher Michael Fulmer and attempting to kill Candice Freeman, 38, and Candice Freeman’s two teenage daughters late Sunday night or early Monday morning. One of those daughters has been identified as 19-year-old Brittany Kay DeVary. A 15-year-old daughter who also was seriously injured has not been named by authorities.

Police received a 911 call at about 12:30 a.m. Monday from a cellular phone that only identified the general area of the caller. A man who called said something about a murder and screaming could be heard in the background, according to a criminal complaint filed in Faribault County District Court.

An officer found the lights were out at every home in the area except at 414 E. Fourth St. When the officer went to the door, he heard screaming and a plea for help. The officer reported finding Fulmer beaten to death in his bed. Candice Freeman was lying next to Fulmer and pleading for help. She was able to tell the officer a masked man had assaulted her and taken her cellphone.

The 15-year-old girl told police she awoke to screams from DeVary, who is her sister. She said her head hurt when she went upstairs to find her mother fighting with a man in dark clothing. The man fled the room after the girl walked in.

David Daniels, a neurosurgeon at St. Marys Hospital in Rochester, later told investigators the younger girl was likely hit in the back of the head with a hammer while she was still sleeping. The officer had reported the girl had blood in her hair when he entered Fulmer’s house.

Brian Freeman became a suspect after police interviewed him at the hospital in Blue Earth, where he was with his 6-year-old daughter. He told investigators he knew his wife was at Fulmer’s house, but he said he didn’t believe it was a romantic relationship because they were all friends. Brian Freeman wasn’t able to provide any “pertinent information” about Fulmer, however.

As Freeman was leaving with his mother to get clothing for his daughter, investigators asked for permission to search his vehicle while he drove to Ceylon with his mother. Michael Anderson, a special agent with the Bureau of Criminal Apprehension, reported finding a face mask and ski mask in the vehicle.

Another BCA agent was sent to Ceylon to watch Freeman while he went to his house to get the clothing. That agent reported seeing Freeman put a partially full garbage bag into the back of the vehicle. When that bag was retrieved and searched later, investigators found bloody clothing inside. Freeman said the blood was from his job at an animal rendering plant, but tests showed the blood came from humans, the complaint said.

Fulmer’s landlord, Steven Newman, told police Fulmer had told him he was having “jealous husband problems.” Fulmer had told Newman he was dating a married woman who had been staying with him for several months.

A search of Brian Freeman’s cellphone revealed text messages between him and his wife. One of those messages allegedly said, “R U leving me for someone else.”

When Brian Freeman was interviewed again at St. Marys Hosptial in Rochester Monday, he allegedly admitted to driving his pickup to Fulmer’s house Sunday night. He said he knew his wife was at the house when he entered it with a hammer.

“Freeman said that he couldn’t really remember the specifics of what then occurred, but he believed that he struck Chris Fulmer in the head with the hammer several times,” the complaint said. “Freeman further admitted he thought that Candice Freeman was injured because she was near Chris Fulmer and ‘got caught in the crossfire.’”

Freeman said the two girls were injured because they were behind him and “somehow” hit. He also told Anderson he tossed the hammer out the window of his pickup somewhere between Blue Earth and Ceylon.

The charges against Freeman said he attempted to murder Candice Freeman and her daughters by striking them “repeatedly in the back of the head with a hammer.”

His bail was set at $2 million Wednesday when he appeared before District Court Judge Douglas Richards. His next court date has been set for March 5.