A funeral service for Chad Nathan Williamson will be held at 1:30 p.m. Thursday at the United Methodist Church in Albert Lea. The Rev. Deb Miller will officiate. Interment will be at Greenwood Cemetery. Visitation will be from 4 to 7 p.m. Wednesday at Bayview/Freeborn Funeral Home and one hour prior to the service at the church. To sign the guestbook go to www.bayviewfuneral.com. 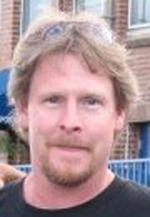 Chad Nathan Williamson was born Sept. 20, 1968, in Germany to Donald Dean Jr. and Rita (Johnson) Williamson. At the age of 9 months, Chad and his family moved back to the United States. He grew up in Glenville where he graduated from high school in 1987. Chad was a member of the United Methodist Church in Glenville where he was confirmed. After graduation Chad worked for Cardinal Canvas until the company moved to South Dakota. Chad then continued his education at Vo-Tech in Albert Lea studying the electrical program. On Oct. 16, 1993, Chad was united in marriage to Sherry Johnson at the United Methodist Church in Glenville. Together they were blessed with two sons: Jordan and Dylan. Chad and Sherry later divorced. He spent several years working at Farmland and later at Bridon Cordage as an electrician and maintenance supervisor. On Sept. 22, 2011, he was united in marriage to Kim Klapperich at South Lake Tahoe. Chad was a loving and devoted husband. Most of all he enjoyed spending time with all of his children and grandchildren who will greatly miss their Papa. Chad enjoyed keeping busy and spending time outside, especially fishing. He was a member of the Fountain Lake Sportsman’s Club. Chad enjoyed vacationing in Colorado and was excited for trips to Virginia and Florida this year with Kim.