Memorial services for Christopher Joseph Calderon, of Albert Lea, will be held at 4 p.m. Thursday at St. Theodore Catholic Church in Albert Lea. The Rev. Eugene Stenzel and Deacon Mike Ellis will officiate. Visitation will be from 4:30 to 7 p.m. Wednesday at the Bonnerup Funeral Service, and one hour prior to the service at the church. Interment will be in Hillcrest Cemetery. 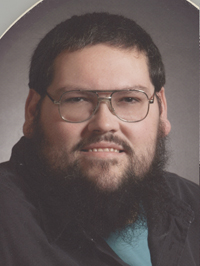 Chris was born Aug. 30, 1972, in Chicago, the son of Jose and Jean (Sheehan) Calderon. He moved with his family to Albert Lea in 1973, and graduated from Albert Lea High School in 1991. He was a member of St. Theodore Catholic Church.

Chris had been employed by the Farmstead Company, Trail’s Travel Center and most recently at Minnesota Corrugated Box.

Chris was an active member of the D & R Star Dart League and served as president of the team. He enjoyed NASCAR racing, fishing, walking and cross country skiing.

Memorials are preferred in lieu of flowers to the American Cancer Society or the donor’s choice.