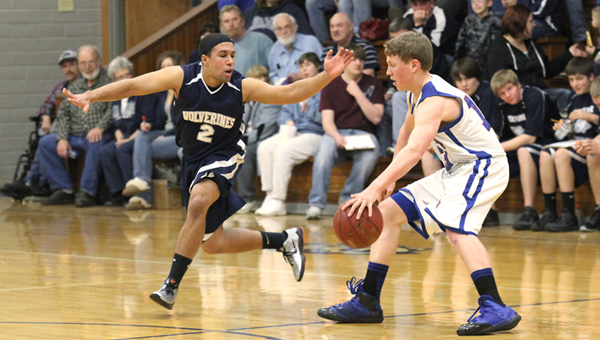 Brandi Hagen/Albert Lea Tribune Perry Kirsch leaps in front of Justin Ward to block him from passing Friday at Glenville-Emmons. The Wolverines lost to Mabel-Canton 49-34.

GLENVILLE — Steve Smith proved to be a challenge for the Glenville-Emmons boys’ basketball team on Friday. Smith led Mabel-Canton by scoring 23 points toward a 49-34 win over the Wolverines.

“He’s a big time challenge,” Glenville-Emmons coach Dan Fredrickson said. “He uses his body so well and when he gets the catch, he scores everytime.” 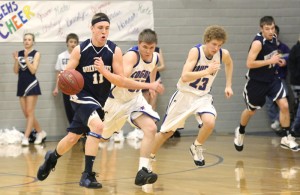 Brandi Hagen/Albert Lea Tribune Wyatt Madson runs toward the Cougars hoop after a rebound on Friday. Madson led the Wolverines with 17 points, eight rebounds, two assists and one steal.

Fredrickson was hoping that Smith would foul out, but it didn’t happen.

Mabel-Canton jumped out to a 5-0 start in the first half. Baskets by Tommy Kirsch and Wyatt Madson brought the Wolverines within one point of the lead with just under 15 minutes remaining in the half.

The scores stayed within five points until the four minute mark when the Cougars took a nine point lead for a halftime score of 31-22.

In the second, the play was switched up. Fredrickson put in Christian Voss, Donta Wills and Aaron Dempewolf, who normally don’t play during varsity games. 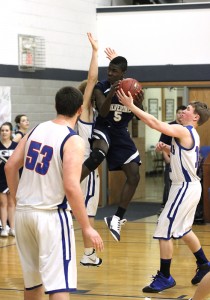 Brandi Hagen/Albert Lea Tribune Donta Wills jumps to shoot with three Mabel-Canton players guarding him. Wills scored one point for the Wolverines in the second half.

“The plan was to see if we could get guys to attack the bucket,” Fredrickson said. “We

were relying on too many 3-pointers.”

The Wolverines shot three for 23 in 3-point shots.

With 14 minutes and 35 seconds left on the clock, the Wolverines trailed by 13-points.

With eight minutes remaining, Mabel-Canton’s Jacoby Bigalk and Adam Fravel each took two shots for a technical foul. Bigalk’s didn’t fall, but both of Fravel’s did.

Shortly after, Madson fouled out leaving the Wolverines short their two low post players. Trenton Thoms was already out because of tonsillitis.

It posed a problem, especially with the way Smith was playing. Fredrickson believes if Thoms and Madson would have been playing together, they would have been able to slow Smith down.

The closest the Wolverines could come to the lead was within 12-points.

With just over four minutes remaining, the Cougars had a 15-point lead and it stayed that way until the final buzzer. 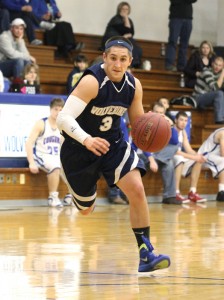 Brandi Hagen/Albert Lea Tribune Derek Olson dribbles down the court in the second half of the game against Mabel Canton on Friday. Olson scored seven points toward the Wolverine loss 49-34.

“I’m very disappointed,” Fredrickson said. “We just came off the best win of the year against St. Clair 56-35. So to do this against someone who is mid-conference with us, someone who we should have taken care of, is disappointing.”

The Wolverines’ next game is away against Immanuel Lutheran on Monday at 7:15 p.m. The Trojans have only played five games this year and their last game was a loss to Glenville-Emmons in January 64-42.