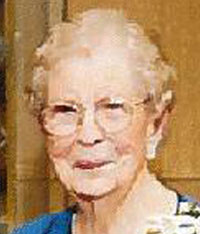 A funeral service will be at 11 a.m. Thursday at the First Lutheran Church in Northwood, with the Rev. Karen Rossing Grandall officiating. Burial will be in the Sion Lutheran Cemetery, rural Lake Mills, Iowa. Visitation is scheduled from 5 to 7 p.m. Wednesday at Schroeder & Sites Funeral Home, Highway 65 South, Northwood. Memorials may be given to Hospice of North Iowa or First Lutheran Organ Fund.

Ellnora was born on March 5, 1912, to Bert and Matilda (Erickson) Anderson of Emmons. On June 27, 1937, she was united in marriage to Walter Willand at Lime Creek Lutheran Church rural Emmons. She was a full-time wife and homemaker. She was active in the church, ladies aid, circle and altar guild at First Lutheran Church in Northwood. Ellnora’s hobbies included fishing, crocheting, gardening, puzzles, baking Norwegian treats and attending baseball games. She especially enjoyed spending time with her grandchildren.