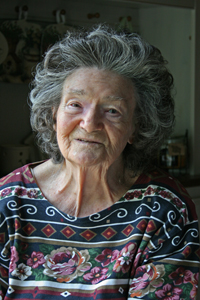 Esther was born Oct. 18, 1926, in Albert Lea to Lavern and Phoebe (Hatch) Larson. She attended school in the Trenton area of Freeborn County. She has lived in Trenton and Albert Lea. Esther was united in marriage to Jesse G. Luna and then became a member of St. Theodore Catholic Church. She worked in various jobs with gardening and worked for Hill’s Gardens. Esther supported the Veteran and made many donations to their organizations. She loved baking, drawing, walking and keeping her flowers beautiful. Esther loved singing lullabies and telling stories to her grandchildren and great-grandchildren, which were her life. She deeply enjoyed the time she spent with her family.

Grandma will be truly missed and her memories will be forever in our hearts.