This is a story about four little girls. They were your typical, playful, daydream-all-day and not-a-care-in-the-world type of all-American girls — the kind Norman Rockwell would paint. 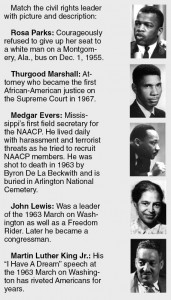 These four girls were at church for its annual youth day. Not only was it youth day, but the four girls, all dressed in white dresses and shiny dress shoes, had the honor of running the 11 o’clock service for the adults of the congregation — what an honor bestowed upon such fine young ladies.

Addie Mae, Denise, Cynthia and Carole had proven to the church to be both trustworthy and educated in the verses of the Bible so they were given the right to put on a service for all the elders of the church. Sunday, Sept. 15, 1963, was to be a great day for these four outstanding children.

As the four gathered together in the basement of the Sixteenth Street Baptist Church, they spoke of the new school year and the promise it would bring to them.

All youth never had as much hope, faith and nervousness as a new school year brings. In the fall, as the colors of the season mix with the warm night air, it just seems like time is endless.

Time shares the thoughts of both fantastic memories and crashing down cruel moments that become etched in our hearts and our minds forever.

A church bombing left these four innocent souls to die in the rubble of a world so torn apart by hate it could not even see the fresh young faces of good that happened to be growing despite the contrary of what society was becoming.

In the 45 years since this tragedy happened, many great things have moved our country in the direction of racial integrity and civil rights for all.

I believe we stand together a much more united country based more on our hope for the future than on the color of our skin.

These four little girls will be etched in my mind forever.

I have a little girl, and the hopes and dreams I have prayed for her, I hope one day will come true. For Addie Mae, Denise, Cynthia and Carole I have only admiration for what they would have become.

I hope that I have half the faith and all of the drive that they have given the world.

I believe if you close your eyes and just remember the pureness of youth, represented by these four angels, you would want to make changes in both society as well as yourself.

February is Black History Month. It is a month that we set aside to recall the heroes and heroism of both the civil rights movement as well as blacks who have stood up for what is righteous and good.

I never personally knew Addie Mae Collins, Denise McNair, Cynthia Wesley or Carole Robertson, but I think of them often.

When I look at my daughter, I want her to know about these four little girls every month and every day of the year.

I want her to know that freedom is not to be taken for granted, and that the color of a person’s skin does not tell you what is inside that person.

This is a story about four little girls.

Tribune Publisher Scott Schmeltzer’s column appears every Thursday. This column‚ without the matching game, appeared in Scott’s column in February 2005.