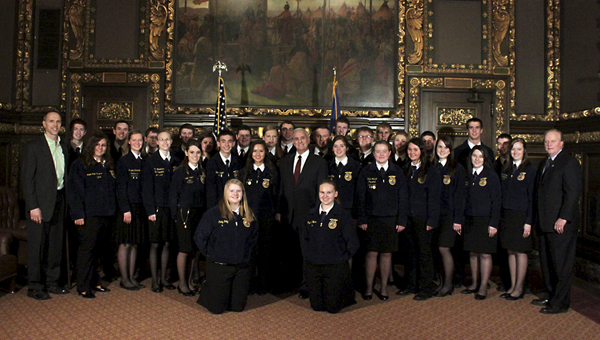 Twenty-seven students were selected from Minnesota FFA chapters to take part in an Agricultral Policy boot camp on Monday and Tuesday in St. Paul. -- Submitted photo

They were at the Minnesota FFA Agricultural Policy Bootcamp on Monday and Tuesday at the Crowne Plaza Hotel.

Kim Meyer, adviser of the Albert Lea FFA chapter, was excited two of his students were chosen for the opportunity.

“It’s neat,” Meyer said. “I expect when they come home to see some changes in them and the changes will stick with them after reinforcement.”

The Policy Bootcamp is new this year and encouraged and challenged students to push past their current knowledge of agricultural issues and policy and become a more informed and active leader in their schools and communities.

It was made possible because of a grant from the Minnesota Agricultural Education Leadership Council.

Students had to apply and be accepted into the conference as there was a limit of two per chapter. According to Leah Addington, Minnesota FFA leadership coordinator, there was a total of 27 students representing 17 different chapters at the conference.

Hagen said there were 20 elected officials who met with them and discussed issues regarding agricultural policy.

“You know you’re a pretty big deal when you get that many to show up,” Hagen said.

“It was pretty intense,” Hagen said. “I think the biggest thing was that I was able to go there and see where bills are made and I was able to meet the people who make them.”

He said it was also interesting because the bills eventually have an affect on him.

“Agricultural policy is going to affect everybody in some way because agriculture is a part of everyone’s life whether they farm or they eat food,” Hagen said.

The students were also paired with mentors who worked closely with them throughout the conference. Hagen and Rice were mentored by Dave Ladd, a consultant in agricultural policy.

Hagen said it was a nerve-wracking experience on the way to the conference because he didn’t know what to expect since it was the first time for the conference.

“It was an amazing experience, and I’m very glad with how it turned out,” Hagen said.

Meyer was pleased Hagen and Rice went because it is something that will also look good on their resumes.

“It makes me proud,” Meyer said. “I always feel proud when I see these kids. The day they left, Alex didn’t bring his official dress with to change into. You know he believes in the organization because he went to class in it. The corduroy coat left years ago, but he’s sold on it. “

During the conference, students covered topics including the history of political influence through agriculture, their personal role in policy engagement and exploration of the legislative process. On Monday, the students also hosted a legislative reception in which they interacted with legislators and state department leaders.