Fire Dept.: Stay off the ice 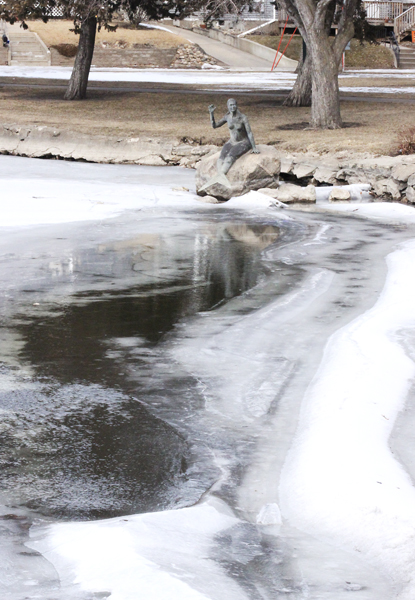 Water and thin ice can be seen at places on local lakes, such as this spot in Fountain Lake near the “Little Mermaid” statue at New Denmark Park. The Albert Lea Fire Department urges people to stay off the ice altogether. -- Brandi Hagen/Albert Lea Tribune

It is the time of year where extreme caution needs to be taken on any body of frozen water.

Lt. Trevor DeRaad of the Albert Lea Fire Department estimated the thickest ice on Albert Lea’s lakes this winter was around 12 inches.

According to the Minnesota Department of Natural Resources, a foot of clear ice is the minimum thickness before people should be driving medium-sized trucks or larger on the ice.

When the Fire Department cut a hole in the ice for the Polar Plunge last weekend, they measured the thickness to be 10 inches of layered ice.

DeRaad said layered ice, which is created when the ice melts and refreezes, is especially unstable.

“It becomes really weak, and it can break through,” DeRaad said.

He said there should be absolutely no vehicles on the lake, recreational or otherwise. He said plastic ice houses are probably OK, but the bigger ones should be removed.

The deadline set by the DNR to remove ice fishing shelters in the southern Minnesota area is March 5.

In this unseasonably warm winter, DeRaad said people should start thinking about getting them off the ice either this weekend or next at the latest.

DeRaad said so far people have been really smart about being on the ice. He hasn’t seen many vehicles on the lakes for the last three or four weeks and there haven’t been any accidents, which is unusual.

People should continue to use their common sense and use caution on anything that looks frozen.

“I wouldn’t take a chance on it,” DeRaad said. “Playing on it, skating on it or cutting across it.”

He said that areas that are aerated can be soft up to 25 feet away.

According to the DNR, there is no such thing as 100 percent safe ice. They recommend speaking with local bait shops or resorts on lakes about the condition of the ice. Once people are on the ice, the DNR recommends they check the thickness themselves with an ice chisel, auger, drill or a tape measure.

For new, clear ice, the DNR recommends for it be at least 12 inches thick before driving a medium-sized truck or larger on it; at least 8 inches for a car or small pickup; 5 for recreational vehicles; 4 for ice fishing or other activities on foot and to stay off completely if it is 2 inches thick or less.

DeRaad said more layered ice is expected on the lakes as it gets cold and warm again.

DeRaad compared the lakes to the local ice rinks. He said they are already closed because they won’t stay decent.