Florence Miller, 96, of Wells, died Monday, Jan. 30, 2012, at Abbott Northwestern Hospital in Minneapolis. Funeral services will be held at 11 a.m. Friday at the United Methodist Church in Wells. Visitation will be from 4 to 7 p.m. Thursday at Bruss-Heitner Funeral Home in Wells, and will continue one hour prior to the service at the church on Friday. The Rev. Paul Woolverton will officiate and burial will take place in Dunbar Memorial Cemetery, Minnesota Lake Township, Faribault County. Bruss-Heitner Funeral Home in Wells is assisting the family with arrangements. 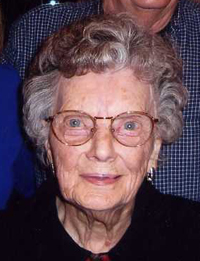 Florence was born Oct. 21, 1915, in Bricelyn, the daughter of Oscar and Emma (Voldahl) Erickson. She was baptized and confirmed in the Bricelyn Lutheran Church. She graduated from Bricelyn High School in 1934 and from Teacher’s Training in 1935. She taught in rural schools in Faribault County.

In December of 1947 she was united in marriage to Orville Miller in the Wells E.U.B. Church. They lived in Wells their entire married lives. Before her marriage she was employed in the office of Musser and Company and Moore Business Forms in Minneapolis. She was a member of the United Methodist Church, a church circle, United Methodist Women, the church choir and the American Legion Auxiliary. Music always played an important part in her life. She served as senior choir director for 31 years. She also directed the men’s chorus for several years. She worked for many years as the bookkeeper at the Wells Farmers’ Elevator. After her retirement she and her husband spent winters in Arizona. She enjoyed music, traveling, reading, card playing and spending time with her grandchildren, great-grandchildren, family, and friends. For the past 2 1/2 years she enjoyed living at the Shepherd’s Inn in Wells.

She is preceded in death by her parents; her husband; one grandson in infancy; two brothers: Floyd Erickson and Donald Erickson, and one sister, Myrtle Hagen.