Francisco “Frank” Raymon Jimenez, 68, of Crawfordville, Fla., and formally of Easton, passed away on Jan. 12, 2012, after a courageous battle with cancer. 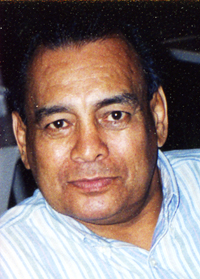 He was a member of Blessed Sacrament Catholic Church for over 40 years and most recently served as a boxing coach/trainer at both Seminole and Legends Boxing Gyms.

Frank’s life was devoted to the boxing profession and he dedicated over 60 years to the sport as both a fighter and a trainer. He was a three time Golden Gloves champion in the state of Minnesota. After his professional career, he focused on the training of up and coming fighters.

A celebration of life memorial service to honor his life was held at 11 a.m. Jan. 21 at St. Elizabeth Seton Catholic Church in Medart, Florida. Customary in his sport, Frank will take the Memorial 10 count – a tolling of the bell 10 times in honor of a recently deceased fighter.

In lieu of flowers, the family requests memorial donations be made to Big Bend Hospice, Tallahassee.

Abbey Funeral Home in Tallahassee is in charge of the arrangements.