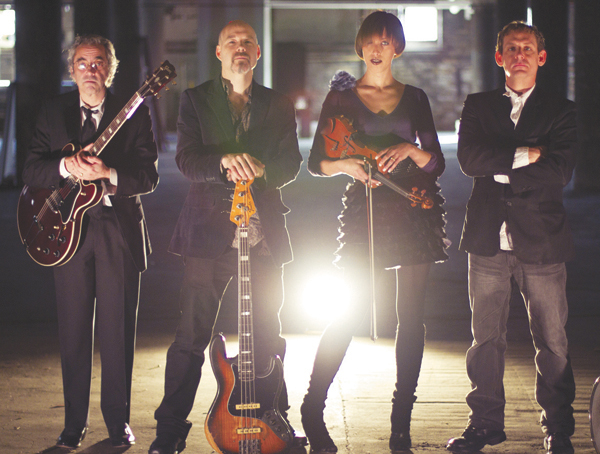 The Galactic Cowboy Orchestra will beam down to the Lighthouse Event Center in Albert Lea this Saturday. -- Submitted photo

Southern Minnesota is about to get galactic.

“We’re really looking forward to it,” said Elisa Wright, GCO violinist. Wright grew up in Blooming Prairie and is especially excited to play so close to home. “We really love playing in this region especially,” she said.

These cowboys have made a name for themselves over the past 3 1/2 years, touring the Midwest and recently making big gains on the East Coast. The band is working on expanding through touring and making alternative music industry connections. They have several North Carolina dates set this year, including a performance at the Shakori Hills GrassRoots Festival in April, which could be moved to October.

The group is also known for their multimedia films that play during shows, which often feature band members.

“Believe me, when we started this band … I had no idea we were going to be making little mini epic films,” John Wright, the group’s bass player said last year. “I didn’t see that coming.”

John, guitarist Dan Neale and drummer Mark O’Day had played together before, in a Grand Ole Opry-style band called Memphis in the Meantimes. During a sound check at one of their performances, the three started an improvisational jam session on stage, letting whatever they had, flow through them out into the music hall.

John called Neale and O’Day up afterward to see if they wanted to form their own side project.

“I had been involved with instrumental fusion projects in the past, and I decided I wanted to do it again,” he said last April.

It wasn’t long before they found the fourth member in John’s wife, Elisa, a Blooming Prairie native. John would bring home tapes of GCO sessions and Elisa would constantly ask to practice with them. John didn’t think Elisa would fit at first, and told her the band’s sound was too complicated.

“My wife wanted to do it, and she had had no previous experience with improvisational jazz and rock,” John said. “I said, ‘Well, this is just too much for you.’”

He was soon proved wrong, as Elisa impressed everyone with her violin skills, honed from years of practice. John’s “ignorance and lack of foresight,” as he puts it, was soon forgotten and the band started making music.

GCO fans can expect to hear many new tunes this Saturday, as the orchestra is in the studio working on material. The group will expand into a few original vocal songs, according to Elisa, a departure from their previous tracks.

“That’s going to be new, very new, and different,” she said.

Elisa will be doing the lead vocals as well. She said the vocal songs won’t be traditionally structured, however. Their new vocal work will have more of a Rush-influenced feel as they stretch their progressive roots. The GCO may even tease two singles they hope to release next month, a vocal track and “Broken Marionettes,” which the group has previously played live.

“We’re definitely going to be breaking out new, original tunes and some cover songs,” Wright said.