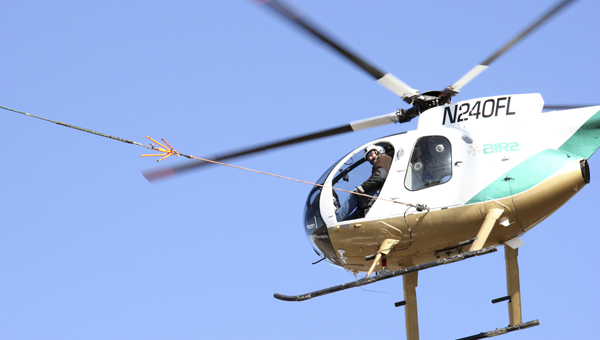 Mike Peters flies ropes on Monday for ITC. It took about three and a half days to fly four ropes an 11-mile distance. -- Brandi Hagen/Albert Lea Tribune

The Independent Transmission Co. last Thursday finished installing 89 steel poles along an 11-mile stretch between Freeborn and Hayward and is using helicopters to string the electric lines.

The steel poles are being used for the upgrading of high-voltage electric lines to increase reliability and support the area wind farms. They will take up less room than the previous two-pole wooden structures, which is important especially to area farmers.

ITC started the project in November with the removal of wooden structures built in the 1950s.

“When you build a line, it’s a large investment, so you build it for 50-plus years,” Bill Broghammer, ITC’s field supervisor for field construction, said. “The lines that were built back in the 1950s have served their purpose.”

ITC purchased high-voltage transmission assets from Alliant Energy in December 2007. So while Alliant Energy customers are still paying their electric bill to Alliant, ITC is doing the transporting of bolt power for them.

The process of upgrading electric lines has become much easier, quicker and has a minimal impact to land-owners because of the use of a helicopter.

Traditionally, heavy machinery was used to replace lines, which had to be set up at each pole and then moved to the next. Broghammer said that process with a 14-man crew would take three weeks, if it was “clean.” Clean means there are no interstates to work around. Crossing an interstate would mean an extra week worth of work.

On the Freeborn-to-Hayward rebuild, there are two interstate crossings. Since the traditional way has faded out and it is common for a helicopter to be used, the first step of installing new lines and flying ropes started on Monday and took just 3 1/2 days. There were four separate ropes that needed to be installed.

Broghammer said helicopters are not allowed to fly across traffic so the interstate traffic had to be stopped for a short period of time. But, compared to the traditional way of 20 to 30 minute shutdown times for each rope, it called for one-tenth the amount of traffic control.

According to Lori Broghammer, ITC’s area manager for local government and community affairs, there is a lot of coordinating that needs to happen for a project like this to go off successfully.

It starts with attending board meetings in the impacted townships so they know who ITC is, what they’ll be doing and what the time frame will be. Lori said by doing so, it becomes easier to deal with any damages that happen during the process because the company is out there doing what they said they were going to do.

According to Broghammer, working on the transmission lines puts extra hard usage on roads.

“We’re very up front with them,” Lori said. “We don’t want to paint a pretty picture.”

The townships are given the choice of hiring someone to fix any damages and bill ITC for the work or ITC will bring in an area contractor to do the job.

“Even though we pay property taxes on what we’re building, ITC takes the stance that we’re not going to put that extra burden of our construction on the rest of the tax-payers,” Broghammer said. “That’s a big deal to the townships.”

The not-so-pretty picture can be frightening to landowners and farmers who don’t want anything to happen with their fields or the tiling. But, ITC is more than willing to work with them to make the lines the least intrusive as they can be.

“If there’s a problem, we’ll look and see,” Broghammer said. “It it’s a problem we’ll fix it. We’re guests on their land. We’re not out there to cause any more damage than we have to.”

The Broghammer’s said there is a huge economical impact from a project like this because ITC buys their materials as local as possible.

“We’re in the community,” Broghammer said. “Where the work is happening is here. That’s where it should impact.”

According to Tom Petersen, director of communications at ITC, the total impact of the Freeborn to Hayward project is $415,000.

Petersen broke it down into five different categories.

The project needs to be completed by March 20, so crews are working six days a week no matter the weather. That date has to be met because when taking out major lines there becomes other constraints.

The ITC team encourages people to contact them if there are any problems because if they don’t know about it, they can’t fix it.