A group of vintage snowmobile enthusiasts is gearing up to send another 50 care packages to deployed soldiers.

Kevin Weitzel, of Glenville, is one of the organizers for an annual vintage show, swap and race that raises money for the care packages called Operation Vintage Pride. The group recently sent 50 packages to Spc. Aaron Enderson, of Hayward, to hand out to other soldiers.

“When I told the guys we were getting that many boxes sent from home they didn’t believe me,” Enderson said while communicating with the Albert Lea Tribune from Camp Buehring, Kuwait. “They were happy to get a package full of snacks and stuff from home.”

“We wanted to do the event but we didn’t know what to do with the money we would raise,” Weitzel said.

Someone came up with the idea of sending care packages to deployed troops, and that’s what they’ve been doing for three years. The hard part in the beginning was finding soldiers to send the packages to, but for that they used Operation Minnesota Nice, a statewide organization that also sends care packages. 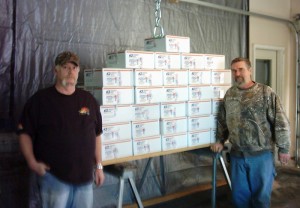 Kevin Weitzel, right, and Rick Weaver pose for a photo by some of the packages they sent at Christmas. They will send 50 more packages in a few weeks. -- Submitted photo

Within the next few weeks he plans to send another 50 packages to Sgt. 1st Class Jeff Dahlen, of Freeborn, to pass out to other soldiers in Delta Company. Weitzel said the hardest part of sending all the packages is filling out customs forms, which is why they send them to one soldier to pass out instead of finding many different addresses.

Popular items stuffed in the care packages include snacks like beef jerky, candy bars, trail mix, cookies, peanuts and personal items like toothpaste and deodorant. Weitzel also includes donated items, like when Dick’s Sporting Goods donated 100s of hats. Another item included is small stuffed animals, which soldiers have said they can use to trade with children for information. Magazines are another popular item for the packages. And one thing Weitzel always wants to include is cards or letters from people back home — he often recruits elementary-age students to make cards or letters.

“Soldiers enjoy those more than anything in the box,” Weitzel said. “Some told me they hang them up in their rooms.”

Weitzel said he does receive some thank-you notes from soldiers, and while they’re appreciated, he doesn’t mind if they don’t have time to send one. He just enjoys knowing whether the packages all made it overseas. He’s also always asking soldiers if they’re including the right stuff in the packages.

“I’ve been told more than once to keep doing exactly what we’re doing,” Weitzel said.

The next Operation Vintage Pride snowmobile event will be from 7 a.m. to 5 p.m. Sept. 22 at the Mower County Fairgrounds. Admission is $5 (members of the military get in free). It’s $20 per site for the swap meet and $10 per sled for drag racing. The event also features a silent auction with many items donated by local businesses.