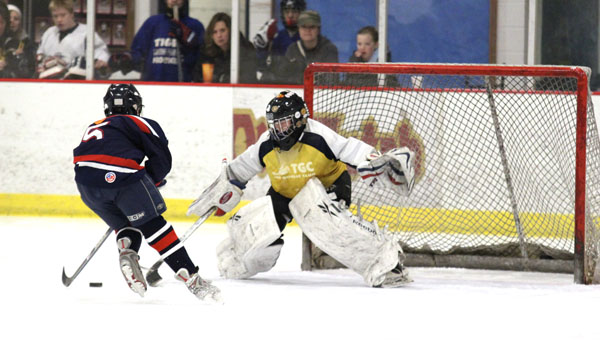 Sam Chalmers, left, tries to trick goalie Ben Witham so he can score on Saturday during a skills competition. -- Brandi Hagen/Albert Lea Tribune

The Albert Lea City Arena was the place to be on Saturday with the sixth annual Hockey Day celebration going on. 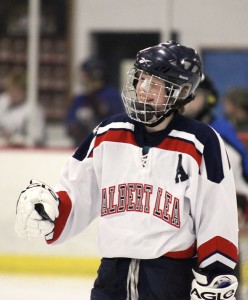 Alex Goodmanson, of Albert Lea, smiles and fist bumps coaches and players on Saturday after falling during an attempt to deke the goalie at Hockey Day at the City Arena.

Throughout the morning, there were skills competitions, in which young hockey players from Albert Lea could see who had the best deke, most accurate shot, hardest shot, was the fastest skater and the best shootout goalie.

During the skills competitions, the Squirts started doing things like what is done during the All-Star competitions.

“They were pulling little hockey sticks out of their breezers,” Jolene Svendsen said with a laugh. “They have so much fun doing it. It’s fun to see them in a different atmosphere than playing in a game at practice.”

Svendsen and her husband, Steve, started Hockey Day in Albert Lea six years ago. They got the idea from the All-Star game.

“We thought it was something we could do with the little kids, and they had a blast with it so we bring it back every year,” Svendsen said.

Some of the events that went on Saturday included the skills competitions, hockey mom shootouts, tailgating, an essay contest about why players like being on a hockey team, a raffle for 10 different prizes and games against nine other traveling hockey teams. 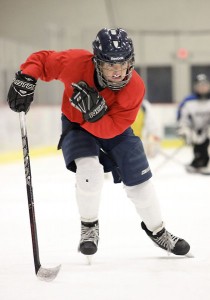 Michael Savelkoul, of Albert Lea, competes in a fastest skater race on Saturday during Hockey Day at City Arena.

After the first period of each game, a mother from the home and away teams would walk out onto the ice and give her best shot at making a puck into the net, with her child’s team cheering from the benches.

After the A Pee-Wee game against Dodge County, a drawing was held for the raffle prizes. The raffle is one of the association’s biggest fundraisers.

On average, it costs between $500 to $1,000 to play one year of hockey, but in Albert Lea those fees can get as low as $200 because of the fundraisers. Chalmers said the cost is the lowest in Minnesota.

With more than 300 kids playing hockey in Albert Lea, Hockey Day becomes a celebration for the families and people in the community who are passionate about the sport. And it isn’t just for the Albert Lea fans. Awards were handed out after each game to a player of the game for both the home and away team.

“We think it’s neat to share the enthusiasm because the hockey community in Minnesota if more than just one town,” Chalmers said. 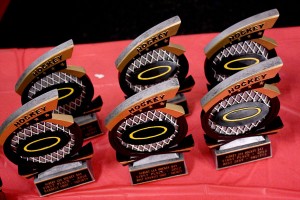 Awards were given out for first and second place during the skills competitions on Saturday.

Chalmers said when something happens to one team in the community, they all are impacted.

Steve said when the hockey schedule is made at the beginning of the year, Hockey Day is the big one that teams want to come for. He also said by seeing what has been done in Albert Lea, other teams have started their own hockey day.

“I think it’s an opportunity for the association to showcase all the kids we have here,” Steve said. “Let the public see all the hard work they put into it. It’s a pretty big deal.”

During the day Steve coached a Pee-Wee team and ran the skills competitions with other local coaches.

Svendsen said that while there are home tournaments, they usually include only one age group. So, Hockey Day included a game for each age group and a scrimmage between the boys and girls high school players so all the home teams had a chance to play.

“It gives them opportunities to experience success, to experience failure and learn how to handle that,” Chalmers said. “I think that’s great. If a community can support that, then they can develop to be leaders and go on to be maybe not be pro hockey players, but successful in any career endeavors they choose.”