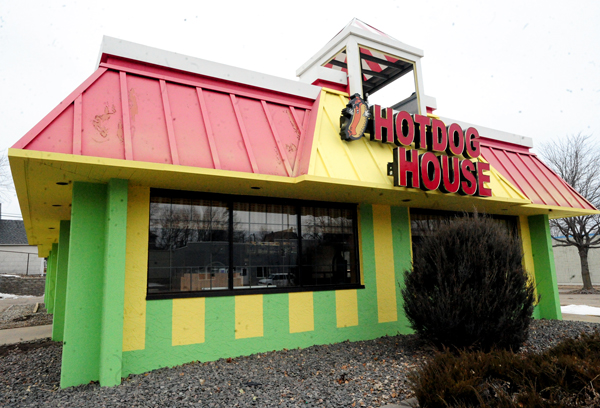 A self-proclaimed fast food junkie is preparing to bring a unique blend of chow to Albert Lea.

Don Wheat of Sioux City, Iowa, purchased the former Kentucky Fried Chicken building on South Broadway Avenue and is planning to open the Hotdog House in the next few months.

The Hotdog House has the town talking about its new paint job, which features wide yellow and green stripes. The eye-catching look was intentional, as Wheat said he wanted to paint the building a fun, attention-grabbing color.

“We’ve sort of created buzz in town with the way we painted the building,” he said.

As the name implies, the Hotdog House with feature Coney Island-style hot dogs, but that won’t be the only thing on the menu. The Hotdog House will feature KFC-style chicken, mashed potatoes, Maid-Rites (or taverns) and coffee and doughnuts in the morning.

Part of the fun for Wheat is that he can operate the Hotdog House how he likes and isn’t tied serving food specific to a fast-food chain, which means he can always adjust the menu.

The food industry is a new venture for the longtime businessman. Wheat owns Alaskan Campers, a company based out of Chehalis, Wash., that manufactures the Alaskan Pickup. But the food industry isn’t a stretch from manufacturing, according to Wheat. Both take a raw material, create something and deliver it to the customer.

“This is very similar to manufacturing,” he said.

The opportunity came when Wheat saw the property for sale, so he said he bought it for a good price. Another plus was the building’s drive-through window, as Wheat said it could account for a large portion of the business.

Wheat is still fixing the building preparing to open, and he said he may move to Albert Lea to be closer to the business.