The funeral service for Howard W. Nelson of Albert Lea will be at 1:30 p.m. Friday at the First Baptist Church of Albert Lea. The Rev. Clayton Balsley will officiate. Interment will be in Hillcrest Cemetery. Visitation will be from 4 to 7 p.m. Thursday at Bonnerup Funeral Service, Albert Lea, and one hour before the service at the church. 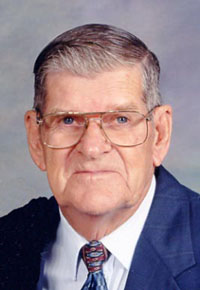 Howard died peacefully at his home on Tuesday morning, Feb. 28, 2012, following a long battle with cancer. He was 86.

He was born on Aug. 7, 1925, in Albert Lea, the son of Walter and Cora (Hanson) Nelson. Howard attended Albert Lea Schools and then began working at Albert Lea Ice and Fuel and Home Lumber Yard. He was an electrician by trade and later worked for Rutherford Electric and Gene Thompson Electric from which he retired.

Howard married Betty Halvorson on Aug. 17, 1945, in Albert Lea and they celebrated 66 years together. He was an active member of the First Baptist Church of Albert Lea where he served in many capacities including head usher, deacon and was on the building and maintenance committee. He enjoyed woodworking , crafts, fishing, hunting and camping in the motor home.

He was preceded in death by his parents; his sister, Wilda VanRiper; brothers: Dick and Jerry Nelson; and son-in-law, Dennis Steele.

Howard was a very giving, kind and loving husband, father, grandfather and friend. He will be fondly remembered for always being willing to lend a helping hand. Howard will be loved and missed by all.

In lieu of flowers, memorials suggested to the American Cancer Society, Mayo Clinic Health System in Albert Lea Hospice, or charity of choice.