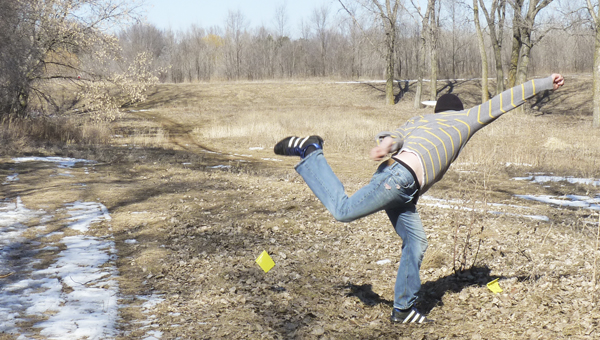 Nick Perry of Mason City, Iowa, tees off Saturday during the Big Freeze Ice Bowl on Hole 3 of the temporary disc golf course the members of the Flying Lea Disc Golf Club set up on the back nine of the former Albert Lea Country Club. Thirty-six people turned out for the tournament, and they donated more than 250 pounds to local food shelves. -- Submitted photo 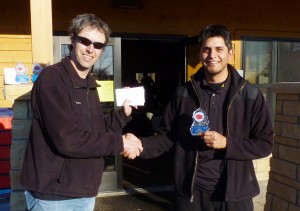 Tim Engstrom, one of the tournament directors, awards the first-place trophy and $80 to Vibram-sponsored pro disc golfer Ross Brandt of Albert Lea.

Ross Brandt, whose primary sponsor is Vibram, shot 20 under par Saturday to win the Big Freeze Ice Bowl. He won the St. Cloud Ice Bowl earlier this winter and has won several other tourneys, but this is the first title he has garnered in Albert Lea.

Brandt is a graduate student at the Minnesota State University, Mankato. He won $80 and a trophy.

The tournament attracted 36 disc golfers from around the region and raised more than 250 pounds of nonperishable food items for local food shelves.

Brian Gustafson, an Owatonna teacher, won a trophy for donating the most food items. 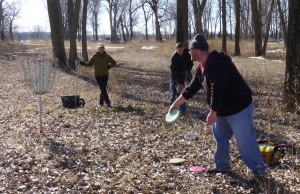 Brian Wells, left, leans on his disc golf cart while Kory Krause putts at Hole 1. In the center is Tim Stumo.

The tournament was sponsored by Nancy VanderWaerdt State Farm Insurance.

Ben Keist of Mankato took second, Mitch Privette of the Twin Cities came in third and Bill Orozco of Mason City, Iowa, won a sudden-death tiebreaker to finish with the fourth-place trophy.

Andy Richardson and Tim Engstrom with the Flying Lea Disc Golf Club ran the Big Freeze Ice Bowl on a course club members set up on the back nine of the former Albert Lea Country Club, now owned by St. John’s Lutheran Home.

36. Art Schorn, did not finish due to injury

Ace pool throwoff: Andy Richardson, $28 (no aces during tourney, so the throwoff decides who gets pool)

Note: Matt Sime scored an ace on Hole 8 during the doubles play.