Funeral services for Lucille F. Wahlers will be held at 11 a.m. Friday at Bethlehem Lutheran Church. The Rev. Ronald Myers will officiate. Interment will be at Pilgrim’s Rest Cemetery. Visitation will be from 4 to 6 p.m. Thursday at Bayview/Freeborn Funeral Home and one hour prior to the service at the church. To sign the guestbook go to www.bayviewfuneral.com. 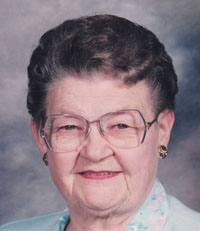 Lucille Frances Wahlers was born Feb. 27, 1926, to John and Frances (Lunacek) Cherney near Clear Lake, Wis. When she was 5, her family moved to a farm between London and Myrtle. Lucille went to country school and then to Austin High School graduating in 1943. She took one year of teachers training in Austin and then taught country schools for 11 years in the London and Myrtle area. On Nov. 28, 1947, she married Cecil Wahlers at Bethlehem Lutheran Church in Myrtle of which she remains a member to date. In 1953 the couple moved from Myrtle to London. After her children were in school, Lucille worked part time in the London store and post office for 26 years. Through the years, Lucille taught Sunday school, and was active in circle and church women’s group. Lucille enjoyed traveling, old time music, crocheting and her favorite pastime was sewing. Lucille sewed for family and friends, herself and the church. She was proud to have helped create many of the banners in the church. The highlight of her sewing was making her oldest daughter’s wedding dress, also, remaking a gown for Miss Minnesota in 1978. Lucille enjoyed collecting thimbles from her own travels and family and friends contributed to her collection. Lucille’s family was very special to her.