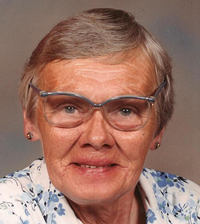 Marilyn graduated from John Marshall High School, in Minneapolis, in 1955.

Marilyn moved to Albert Lea to raise her three children. There she graduated from ALAVTI with an emphasis in bookkeeping. She initiated a program that allowed low-income families to receive childcare. She worked at the Mall Snack Shoppe and St. John’s Lutheran Home before moving to Colorado Springs, Colo., in 1988 to be with her daughter and family. She provided daycare for her granddaughters and was active at First Lutheran Church in various capacities. She enjoyed reading and said she could go anywhere in the world without leaving her living room as long as she had a book. She had a quick wit and an amusing sense of humor.