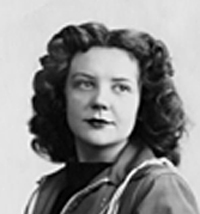 Pat was born on Oct. 15, 1927, in Albert Lea to Raymond and Vesta Wright, and she was raised in Albert Lea where she graduated from St. Theodore Catholic School. In 1947, the Albert Lea Tribune reported that “Pat Wright was one of 10 contenders for the title of Albert Lea’s Snow Queen, and she won this honor at a dance where music was provided by the Al Menke Orchestra.” During World War II, Pat was a volunteer nursing assistant and spent many hours making bandages for the military. Pat married Richard Donovan Helgeson of Lake Mills, Iowa, in 1948. During their 58 years of marriage, they raised five children and moved from Iowa to Kansas, Texas, Georgia and Colorado. After Richard’s retirement from Del Monte Foods in 1992, they relocated to Sun City West, Ariz., where Pat was a volunteer at the Sundome, a golfer and a bridge player. After Richard’s passing in 2006, Pat spent her final years living with her son, Mark, in Westminster, Colo., where she enjoyed daily walks to view the snow-capped Rocky Mountains. Pat was known for her kind and pleasant personality and her often heard expression of “Uffda!”

Pat was preceded in death by her parents; her brothers: Jim of Las Gatos, Calif., and Jack of Clarks Grove; and an infant sister, Geraldine.

In lieu of flowers, donations may be made to the Mary P. Helgeson Alzheimer’s Memorial Fund at http://act.alz.org/goto/Mary.Pat.Helgeson.