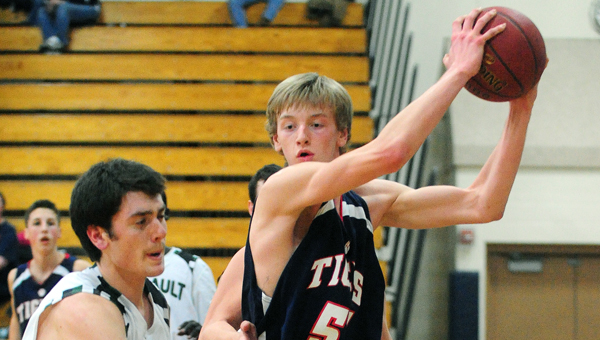 Albert Lea sophomore Cody Scherff holds the ball away from two Faribault defenders on Friday during the second half of a 68-39 win at Albert Lea High School. Senior Kyle Ooms drew within 10 points of 1,000 for his career. -- Andrew Dyrdal

Tigers’ senior Kyle Ooms, who entered the game 29 points shy of 1,000 for his career, was held to six points over the game’s first 23 minutes. He hoped to reach the milestone in front of his home fans and scored 13 of the Tigers’ 16 points during a six-minute stretch midway through the second half.

Ooms finished the game with 19 points — 10 away from becoming the fourth player in Albert Lea boys’ basketball history to eclipse 1,000 over a career and the first since 2006. He will look to join Jeff Schultz, Ben Woodside and Parker Skophammer in the 1,000-point club on Tuesday at Rochester Century.

“It’s frustrating not getting it at home, and we’ll see what happens on Tuesday, but I’m just glad we went out there and got the win,” Ooms said. “We’re on a two-game winning streak and we’ve got some momentum heading into Tuesday.”

“We have a lot of momentum, and we feel these last four teams are beatable,” said Ooms, referring to Century, Winona, Waseca and Rochester John Marshall. “We’re hoping to go out there and see if we can get four more wins and go into sections with a lot of thunder.”

The Falcons (1-21, 1-13) slowed the pace of play down and thus limited the amount of possessions the Tigers had on offense and chances for Ooms to score. Still, Tigers coach Lucas Kreuscher said the opportunities for Ooms to score were there.

“We talked about Kyle at halftime, and he needed to work a little bit harder,” Kreuscher said. “He got caught standing and watching rather than going to find somebody and getting post ups. He got away from being aggressive, and I thought he did a lot better job in the second half of working harder so he could be in position to score.”

Evan Templeman scored seven of the Tigers’ first 10 points against the Falcons, which had lost four straight after notching its first win on Jan. 27. Tyler Wichmann made back-to-back 3-pointers, forcing a Falcons timeout, and hit another out of the timeout to give Albert Lea a 21-6 lead.

Ooms was held scoreless for 10 1/2 minutes and made his second field goal with 4:25 left in the first half, before Cody Scherff and Templeman scored, and Tyler Vandenheuvel hit one of his two 3-pointers to give the Tigers a 34-17 lead at halftime.

Ooms scored a layup 50 seconds into the second half, but the Falcons trailed by only 13 points with 16:30 remaining.

Wichmann made his fourth 3 of the game to extend the lead to 18 and cue an 18-2 run over the next six minutes.

Scherff knocked down a 15-foot jump shot, Dylan See-Rockers scored on consecutive steals and layups, including a three-point play after he was fouled on the first one, and Ooms scored eight straight to extend the lead to 54-23.

Vandenheuvel hit a 3 to give Albert Lea its largest lead of the game at 33 points with 10:15 remaining, but the Tigers were outscored 15-5 over the ensuing eight minutes as Ooms was held to eight points.

After a slow start, Ooms looked to have a chance to make the milestone when he reached 14 points with more than 10 minutes left, but he was pulled from the game with three minutes left while stuck on 19.

Ooms did move up to fourth place all-time with 990 points, passing Mike Petersen. He is 22 points away from being third all-time and 101 away from second. Woodside is the school’s career scoring leader with 1,717 points.

“I feel good,” Ooms said. “I thank my teammates for giving me the ball and for everything we do as a team.”

Templeman finished with 13 points, and Wichmann had 12. The Tigers were 11 of 12 from the free throw line three days after the team set a school record shooting 22 of 23 at Mankato West.

The Tigers had lost four straight before the win over West against four of the top five teams in the Big Nine Conference. Kreuscher said the team looked at the West game as the start of a new six-game season in which it has a chance to go undefeated.

“Offensively, we’ve better pretty consistent throughout the year,” Kreuscher said. “Defensively, we just need to do the little things.

The Tigers play at Century at 7:30 p.m. on Tuesday before playing twice at home against Section 1AAA opponents Winona and Waseca. The Minnesota Timberwolves mascot, Crunch, will be performing at halftime of the Waseca game.