Muriel Christiana Lindeman-Segerstrom, of Owatonna, died on Feb. 6, 2012, at her Park Place home. She was 95.

Muriel Schneider was born on her family farm in Freeborn County on April 12, 1916. Muriel’s passion was her family and many friends. She touched many lives with her love, spirituality, wisdom and care-giving nature. On Feb. 6, 2012, she died at her Park Place home in Owatonna surrounded by her family. 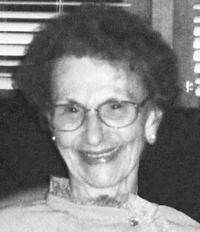 Muriel was the daughter of Albert and Anna (Schmidt) Schneider. She was confirmed on April 13, 1930, at the Pickerel Lake Concordia Lutheran Church. After finishing eighth grade in a small country school, she attended Waldorf Academy for one year and then went on to Albert Lea High School, graduating in 1935.

On Sept. 22, 1937, she married Franklin Henry Lindeman at Concordia Lutheran Church. The couple moved to Franklin’s home farm near Conger where they raised five children and farmed 160 acres. Muriel helped on the farm while being an active member of their Conger St. Paul’s Lutheran Church, where the couple were charter members. In addition to being a loving mother and wife during that time, Muriel also served as president of the ALCW, taught Sunday school and Bible school, was president of Freeborn County Home Council and the County Extension Club, and was a 4-H leader.

In 1981, Franklin and Muriel retired and the couple moved to Albert Lea. They dedicated their time to family and friends as well as volunteer work, such as taking part in Senior Resources and volunteering at St. John’s Lutheran Home. They spent their winters in Texas.

Franklin passed away on March 5, 1986. Muriel was heart broken, but she was always a strong and resilient woman, and over the course of the next five years she rebuilt her foundation and eventually was remarried to Ben Franklin Segerstrom on Dec. 22, 1991, at St. John Lutheran Church in Owatonna. Muriel and Ben kept both of their homes, his in Red Wing, and Muriel’s in Albert Lea, traveling back and forth between the two so they could continue to stay involved in their friends’ and relatives’ lives, as well as the activities and volunteer work they had been active in prior to their marriage. They wintered in Texas. Ben passed away in February of 2007. For the past several years Muriel had been living at Park Place Senior Congregate in Owatonna. Muriel lived for 95 years and kept a sharp mind and loving heart the whole way through.

Muriel is survived by her children: Barbara (Michael) McGaughan of Normal, Ill., Dean Lindeman of St. Paul, Clarice (Vic) Richardson of Owatonna, David Lindeman of Minneapolis and Steven Lindeman of La Crosse, Wis.; as well as her step-son, Bruce (Julie) Segerstrom, of Hager City, Wis.; step-daughter, Joan (David) Sharp of Red Wing; a step-son-in-law, Tom Ruble of Prescott, Wis.; and a brother, Elmer Schneider, of Albert Lea. She has 13 grandchildren and 23 great-grandchildren.

She was preceded in death by her husbands: Franklin and Ben; step-daughter, Beverly Ruble; a great-grandson, Kaidin Richardson Minowa; and a sister, Frieda Schneider.

Muriel is currently in heaven pursuing some of her favorite activities, such as dancing, making delicious baked goods for hungry angels and watching over her loved ones.

A memorial service will be held at St. John Lutheran Church in Owatonna at 2 p.m. Wednesday. Visitation will begin one hour prior to the service. A private burial will be held at a later date at Bear Lake Cemetery. In lieu of flowers, family prefers that contributions be sent to the AHA, Owatonna Hospice, Park Place Senior Congregate & Assisted Living or the St. Paul’s Lutheran Church in Conger. A website has been set up in which stories and memories may be submitted at Lindeman-Family.com. Arrangements by Michaelson Funeral Home, Owatonna.