ROCHESTER — Kyle Ooms arrived at Albert Lea High School as a sophomore, from a small Iowa town and unsure if he could conquer the Big Nine Conference.

He’ll leave as one of the top four scorers in Tigers boys’ basketball history.

Ooms scored his 1,000th career point on Tuesday in an 86-70 loss at Rochester Century. The senior reached the 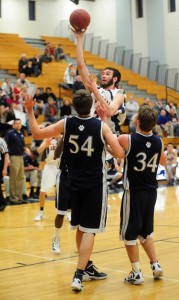 Albert Lea senior Kyle Ooms scores his 997th career point on Tuesday during the first half of a 86-70 loss at Rochester Century. Ooms finished the game with 21 points and 1,011 for his career, one point shy of third all-time. -- Andrew Dyrdal

milestone on an and-1 layup with three minutes and 12 seconds left in the first half and finished with 21 points.

Ooms transferred to Albert Lea from Aplingston-Parkersburg High School in Parkersburg, Iowa, in 2009 after his dad, a pastor, took a job at Hollandale Christian Reformed Church. He said playing small-town Iowa basketball to against some of the largest schools in the state was a big leap.

“Especially since we weren’t winning that first year,” Ooms said, of his sophomore season when the Tigers finished 4-21. “It was really stressful. But the last couple years we’ve become closer as a team and really bonded.

“We’re just trying to get those wins up there.”

“It feels pretty good individually to go out there and hit these milestones,” Ooms said. “I’m pretty disappointed we lost the game, but we’re looking to get back in the gym and get ready for Friday.”

Ooms entered the game needing 10 points to reach 1,000 and scored his first five on free throws as the Tigers fell behind 18-9. Two layups brought Ooms within a point, and he tried to reach the milestone with an emphatic dunk but missed off the front rim. Evan Templeman snatched the rebound and scored a layup while being fouled, and Ooms laughed and looked up into the bleachers at fans holding signs ready to celebrate his acheivement.

“Tyler (Wichmann) had the breakaway and I really wanted it,” Ooms said. “He gave me a little shuffle pass but as I went up I lost control. I felt kind of stupid that I didn’t put that one down.” 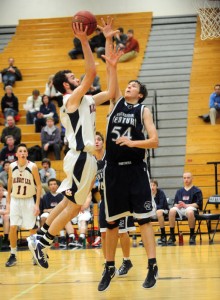 Albert Lea's Kyle Ooms goes up for a shot on Tuesday during the second half of a loss to Rochester Century. -- Andrew Dyrdal

Ooms and his fans didn’t have to wait much longer as he scored his 1,001st point a minute later and was met at halfcourt by his teammates and coach and given the game ball.

Tigers coach Lucas Kreuscher said Ooms has done it all with hard work and hustle.

“He is a perfect example of how good you can be when you just outwork the guy guarding you,” Kreuscher said.

Ooms is unlike the other three members of the 1,000-point club not because of his woolly beard, but because he isn’t an elite shooter and scores almost exclusively within 10 feet of the basket. But while he’s never scored a 3-pointer in his career, he’s made plenty the old-fashioned way.

“I thought getting it on a foul and-1 shot was more of my style, though,” he said. “It was fitting.”

Ooms’ feat was mired in a 16-point loss in which the Tigers rallied all the back from a 17-point deficit to take a four-point lead, only to lose it at the end.

Albert Lea regained hope after six straight points narrowed the gape to seven, but the Panthers outscored the Tigers 22-13 over the games’ final 5:50.

With the loss, the Tigers failed to record its first three-game winning streak since March 3-11, 2006, and snapped Century’s three-game skid.

Ooms, whose beard has grown bushier for each game this season, said the 1,000-point milestone may not be enough incentive for him to shave it off.

“Maybe if we win our next three games I’ll do that,” he said.