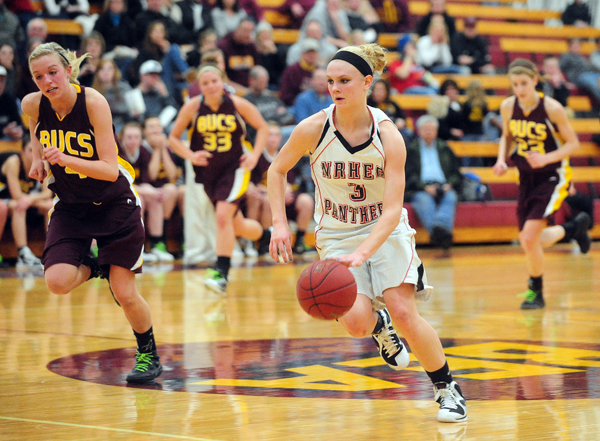 BLUE EARTH — Carlie Wagner is one of the state’s most prolific scorers.

She found it on Monday night, and with Blue Earth’s defense as her victim, she unleashed it. 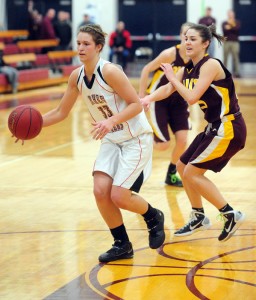 The Panthers’ Anna Schlaak (33) drives into the lane on Monday during the second half of a win over Blue Earth. -- Andrew Dyrdal

Wagner scored 19 straight points in a back-and-forth second half against the Buccaneers, and lifted the undefeated Panthers to a 59-43 win over its section rival.

Wagner scored the second-ranked Panthers’ final points of the first half, too, making it 21 straight over a 14-minute stretch. She scored 10 of NRHEG’s 13 field goals in the second half, and assisted on two others.

“My goal was to penetrate and get to the hole,” said Wagner, who finished with 29 points and team highs in assists (6) and steals (5). “If they collapsed on me I could kick it out to teammates, but I was told to drive and if they don’t stop me I take it all the way.”

The sophomore was 3 of 3 from the free throw line in the second half and used a nifty spin move to slice through two, often three defenders. Wagner scored three straight times on steals and breakaway layups, including two within 13 seconds to push the Panthers’ lead to 45-31 and force the Bucs to call a timeout.

Katie Cole scored the Panthers’ first field goal in the second half that wasn’t made by Wagner with 5:45 remaining and scored an and-1 layup two minutes later off a Wagner pass that zipped through the Bucs’ defense.

Hannah Lundberg and Anna Schlaak also scored before Wagner, who went scoreless for six minutes, notched her 21st point in the second half after another spin into the lane with 52 seconds left. 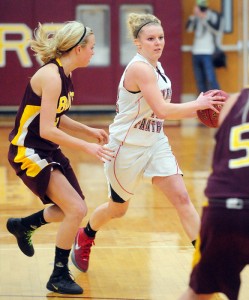 The Panthers’ Jade Schultz looks to pass the ball on Monday during the first half of a 59-43 win over Blue Earth. -- Andrew Dyrdal

Panthers coach John Schultz said Wagner could score at will all game, but he struggles coaxing her into playing with that mentality.

“She wants to be a team player,” Schultz said. “She would probably take giving the ball up and letting the game get close before that.

“But when the game gets tight and it’s a big game, she’ll go for it. Right now there’s not too many teams that have an answer for a kid like that.”

The Panthers’ game against Blue Earth was its final big test of the season before beginning the Section 2AA Tournament on Feb. 28. The Panthers have two regular season games remaining this week against Medford and Randolph, but beat them by a combined 121 points in their first meetings. The Bucs, on the other hand, eliminated the Panthers from the playoffs in two of the past three seasons.

“Blue Earth is a really tough team, and every year they knock us out,” Wagner said. “They have a really tough defense. It’s tough to get by, and I think our confidence level is raised a lot from this win.”

While Wagner stole the show in the second half, Schultz said he was encouraged by the balanced scoring in the first half when his star was limited to eight points.

Schlaak had a team-high 13 points — including a deep 3-pointer that was the team’s lone make in 17 attempts from behind the arc — in the first half as five different Panthers scored.

“That was Schlaak’s best half of offensive ball,” Schultz said. “She’s usually doing all the other things for us, so it was good to see her step up as a threat.”

The Panthers ended the game on a 5-0 run and outscored the Bucs 28-24 despite the efforts of Blue Earth’s Krista Hassing.

Hassing played toe-to-toe with Wagner and singlehandedly kept the Bucs within striking distance. The junior forward scored a game-high 30 points, including 20 straight while Wagner went on her run. Hassing and Wagner combined to score 35 straight points during an 11-minute span and 41 of 52 points in the second half.

With the win, the Panthers remained the only undefeated team in Class AA and one of three in the state, along with Hopkins and Parkers Prairie. At 24-0, the Panthers are off to its best start in school history.

“We’re much more seasoned this year and can handle anything they throw at us,” Schultz said. “I’m real happy at this point.”