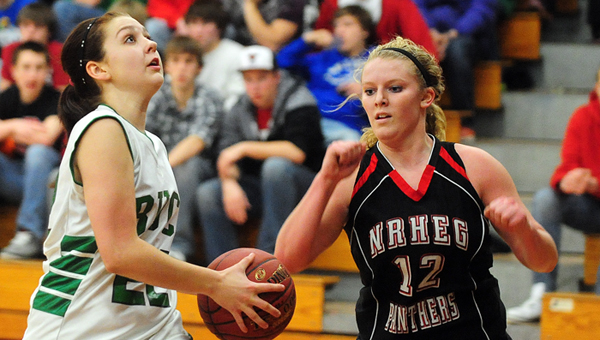 New Richland-Hartland-Ellendale-Geneva's Jade Schultz (12) looks to strip the ball from Waterville-Elysian-Morristown's Kalley Kendall during the first half of a 72-48 win in New Richland.

NEW RICHLAND — The New Richland-Hartland-Ellendale-Geneva girls’ basketball team continued its best start in school history on Friday with a 72-48 win over Waterville-Elysian-Morristown.

The Panthers, ranked second in Class AA, notched its 23rd consecutive win to start the season and 14th in the Gopher Conference, which it won for the fourth straight season.

Carlie Wagner scored 35 points for the Panthers, including 19 in the first half, and Anna Schlaak added 11 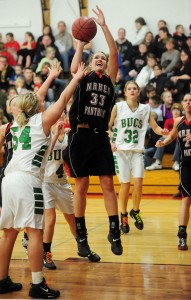 New Richland-Hartland-Ellendale-Geneva’s Anna Schlaak (33) shoots a jumpshot on Friday during the second half of a 72-48 win over Waterville-Elysian-Morristown. Schlaak had 11 rebounds to help the Panthers secure win No. 23. -- Andrew Dyrdal

The Panthers (23-0, 14-0) have three games left in the quest for its first perfect regular season, including its last big test at Blue Earth on Monday. The closest it came before was in 2008-09 when it started 20-0 but lost to Waseca during the regular season and eventually Blue Earth during the section tournament.

It took time for the Panthers to shake off the scrappy Buccaneers, but once it did, it built a big enough lead to ride over the rest of a back-and-forth game.

The game was tied at 13 with 11 minuets and 20 seconds left when Jade Schultz hit a 3-pointer that was the first of 12 unanswered points and cued a 30-9 run into halftime.

Wagner scored seven of the Panthers’ first 12 points, including a 3-pointer that pushed NRHEG into the lead for good at 6-5.

The All-State sophomore scored six of nine points to cap the Panthers’ 12 unanswered, and another six over the opening half’s final three minutes to give NRHEG a 43-22 lead at the break.

“She did her thing,” Panthers coach John Schultz said of Wagner. “She would rather have 35 assists than points, which you can tell by watching her, but she’s that kind of person.”

Wagner scored in just about every way possible. She made one 3, was 7 of 9 from the free throw line and made as many jump shots as layups. Wagner had four assists and four steals, too.

“Wagner did a nice job going to the hoop and distributing the ball,” Schultz said. 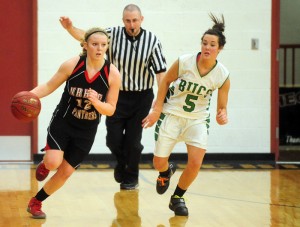 Jade Schultz scored nine of her 12 points in the first half, including two of three 3’s, but the Bucs hung around in the second half and didn’t let the Panthers get too comfortable.

The Panthers scored the first three points out of the break, but the Bucs responded with a mini 4-2 run and held NRHEG to 13 points over the second half’s opening seven minutes — an improvement after the Panthers scored 10 in the final four minutes of the first.

The Bucs went on a 7-2 run to pull within 64-44 with 4:57 remaining in the game and quickly called a timeout, but Wagner scored six straight for the Panthers to go up 70-48 before sitting out for the first time all game with 3:50 remaining.

The Panthers scored the final four points of the game but outscored the Bucs just 29-26 in the second half.

“We weren’t real happy with that,” Schultz said. “They kept coming back at us and we had some breakdowns and turnovers.

“We were happy with the first half, though, and we were hoping to extend that a little more. But they played 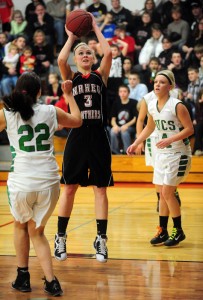 Panthers sophomore Carlie Wagner shoots a jumpshot on Friday during the second half against the Bucs. -- Andrew Dyrdal

Closing in on the Section 2AA Tournament, which begins on Feb. 28, the Panthers are working on a new motion offense, which Schultz said it’s still “struggling” with. Asked why he would change the offense of a team that’s 23-0, Schultz laughed and said:

“We’re trying to prepare for the big games against teams who play great man-to-man defense. We need to move our scorers around a little more so they can’t lock on and double them up.

“We want something else there so we can’t say after we’re done: ‘We should have done this.’”

In order to wrap up the No. 1 seed in Subsection 2AA South — which is shares with Southland (18-2, 13-2 Three Rivers) — the Panthers must first knock off section rival Blue Earth, a team it has lost to in two of the last three postseasons.

The Panthers play at Blue Earth (15-4, 7-2 South Central) on Monday night before facing Gopher bottom feeders Medford and Randolph to round out the regular season.

“They’re athletic with long athletes that move well,” Schultz said of Blue Earth. “They’ve done very well this year and it will be a tough game for us.”