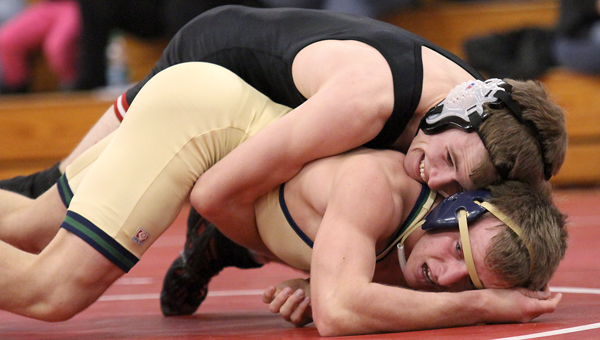 NEW RICHLAND — The New Richland-Hartland-Ellendale-Geneva wrestling team knew their first three weights would be tough matches on Thursday against Waterville-Elysian-Morristown/Janesville-Waldorf-Pembleton. After sticking it out, they breezed through the dual for a 42-27 win. The win made them tied with WEM/JWP and United South Central for the Gopher Conference title. 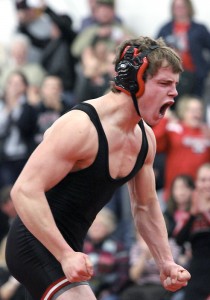 The dual went a little different than NRHEG coach Paul Cyr had planned, but allowing a forfeit at 170 pounds allowed for the best matchups.

“We knew we would have to weather the storm in the first three weights,” Cyr said. “Otherwise, we wrestled really well. I was pleased with the fact we got some pins and stayed off our backs. It was a fun win, good atmosphere and a good crowd.”

Matt Dahle was moved to 182, Seth Petranek 195, Geoff Ramaker 220 and Wyatt Fitterer 285. Both Petranek and Ramaker were able to pin their opponents in under a minute in the new weight class. Fitterer, an eighth-grader, held off his freshman opponent, Taylor Grams, until a fall at 2:49.

With two falls and a decision, WEM/JMP had a 15-0 lead to start off the night. A fall by Dustin Esplan (126) at 3:02 gave the Panthers their first six points. From there, they won the next five matches with three decisions and two falls for a 24-15 lead.

During the last fall of the streak, WEM/JWP’s Mitch Wolter was put in instead of Ben Boran to wrestle Nathan Krohn (152). Krohn led 12-3 in the first period and pinned Wolter at 2:32 in the second.

The first time Krohn had his opponent on his back the crowd was so loud he thought he secured the fall. After realizing he hadn’t yet, he wrestled to put Boran back on the mat.

Krohn, a sophomore, said it was his and the other young wrestlers’ goal to do well for the seniors because it was their last conference meet. 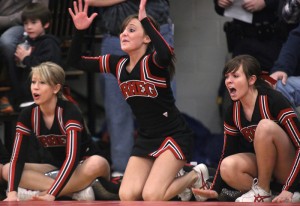 Brandi Hagen/Albert Lea Tribune Kylie Beenken throws her hands up in excitement as New Richland-Hartland-Ellendale-Geneva's Geoff Ramaker closes in on a fall Thursday at home.

Ramaker said he was expecting a different opponent for his match so when Jeremiah Kuball walked onto the mat, all he could think of was how much taller Kuball was than himself.

“I just bear hugged him with his back and held on for dear life,” Ramaker said. “It feels good since it’s not really my sport, football is. It feels really good to be an asset to the team and help them out any way I can.”

Cyr said he was pleased with the way his team wrestled Thursday and said it gives them momentum for sections, but he believes no matter what anyone else has to say Jackson County Central will win.

“If we would have been completely healthy we would have had a shot, but realistically, not a chance,” Cyr said. “It disappoints me, but I’ve done it long enough. I’m not going to lie to the kids. So why give them a sing-song and dance about this. Truth of the matter is, Jackson is just better than anybody in our section.”

While Cyr has already made up his mind, the wrestlers are looking forward to sections with hope.

Krohn said he knows NRHEG is facing tough teams but believes if they give it their all they have a chance.