Pucker up for patients 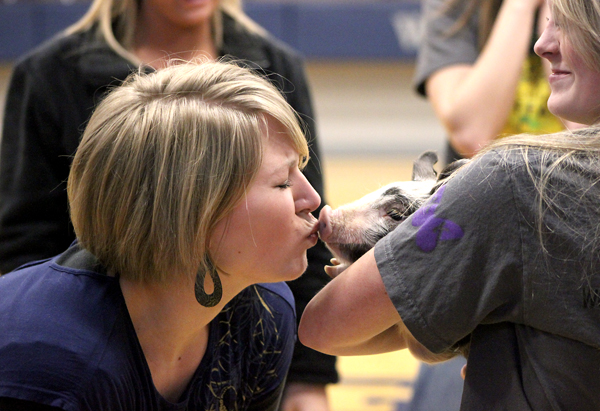 GLENVILLE — Before kissing a piglet on Friday, Mikayla Meyer, an English teacher at Glenville-Emmons High School, made a show of applying fresh lip gloss and freshening her breath with a mint.

Meyer was chosen out of four teachers by the student body to kiss the pig during Ag Olympics, a celebration of National FFA Week. Students placed votes by dropping money into one of four buckets. The money raised from the votes will be donated to an organization called, Pennies for Patients.

Students were dismissed from class early and took part in different activities planned by the Glenville-Emmons FFA chapter.

Besides the Kiss-the-Pig fundraiser, there was a dodgeball tournament, contests for butter sculpting, hula-hooping and jump roping, a game of catch the chicken, balloon popping and a race to untie a frozen T-shirt. There was also a competition where students had to use their faces to find a piece of bubble gum in a pie pan filled with whipped cream and then blow a bubble.

The events took place in the school gym and lasted until the end of the school day.