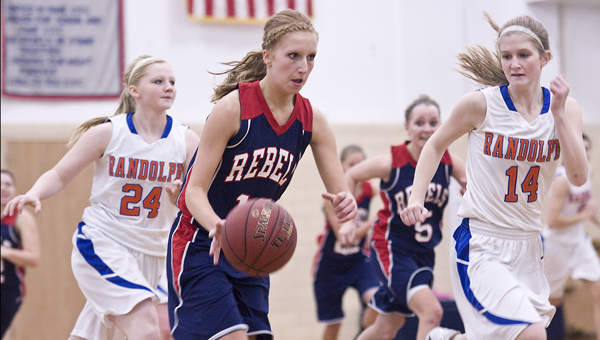 Brandi Hagen/Albert Lea Tribune Lizzy Leland takes off with the ball after a missed shot by Randolph Friday at home. Leland played both B-squad and varsity.

WELLS — United South Central girls’ basketball team blew through their game against Randolph on Friday with a 64-19 win. The team has had to step up their game since adding a third player, Cassidy Latusek, to the bench due to injury. Latusek is out with a concussion. 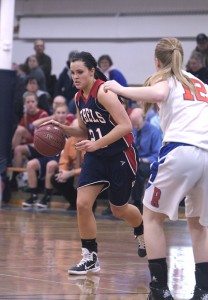 Brandi Hagen/Albert Lea Tribune Allie Voigt makes her way to the net during the second half of USC's game against Randolph. Voigt had a double-double night with 14 points and 11 rebounds.

The Rockets struggled with Amanda Allis as she led the Rebels with 20 points, seven rebounds, one assist and two steals.

“It feels really good,” Allis said. “I’ve had a couple rough games lately, for me anyway from my perspective, so it’s nice to get out and do something good.”

She said she took time before the game to think about what she needed to do.

“I was thinking about post moves and about aiming high on the backboard and it worked out,” Allis said.

“She’s a girl, too, that at the start of the year wasn’t even a starter for us,” USC coach Stu Hendrickson said. “Now she’s playing major minutes and we’re going to need that.”

Allis said the team was nervous after coming off two losses and they weren’t sure how the game against Randolph would go. They just wanted to bounce back.

Hendrickson said everyone really pulled their share in the game, including Bailey Klingbeil and Lizzy Leland who haven’t had a whole lot of experience on varsity. 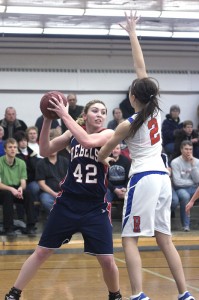 Brandi Hagen/Albert Lea Tribune Amanda Allis looks for a place to pass on Friday during the second half of the game against Randolph. Allis led the Rebels with 20 points toward a 64-19 win.

Leland usually plays just B-squad, but only played one half on Friday so she could play two of varsity.

“She’s pretty athletic,” Hendrickson said. “We haven’t had room for her on our regular rotation until we had all these injuries. It’s good to get her some experience.”

“We want the girls to improve,” he said. “That’s the name of the game. We want everyone to step up and play their role. That’s what makes the team get better.”

One of the Rebel’s strong suits Friday was their passing. They had 19 assisted baskets.

“All three of our guards, Kristie Ovrebo, Katie Ovrebo and Abby Trio are really looking ahead for their post,” Hendrickson said. “They’re finding Amanda when she’s posted up. They’re very unselfish and unselfish players make for a better team.”

Voigt scored the first two points of the game which were quickly returned by Randolph’s Jami Kusilek. The Rebels left Randolph in the dust, though, as they went on a 20-point run until the remaining seven minutes of the first half. It was then the Rockets were able to score nine more points but not enough to catch up as the Rebels closed out the half 27-11. 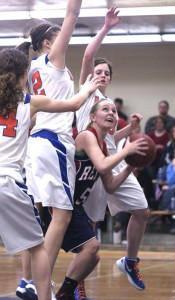 Brandi Hagen/Albert Lea Tribune Kristie Ovrebo is covered by three Randolph players as she tries to shoot on Friday. Ovrebo scored 10 points for the Rebels.

USC pressed on in the second half with a 15-point run over the first seven minutes before letting the Rockets score again. With 11 minutes remaining, the Rebels had a 44-13 lead.

Over the next four minutes, Randolph made four baskets before the Rebels went on their third and final streak of the game to add another 16 points to their total.

Hendrickson said the 45-point win was fun for everyone and he was especially happy with the way the girls played defense.