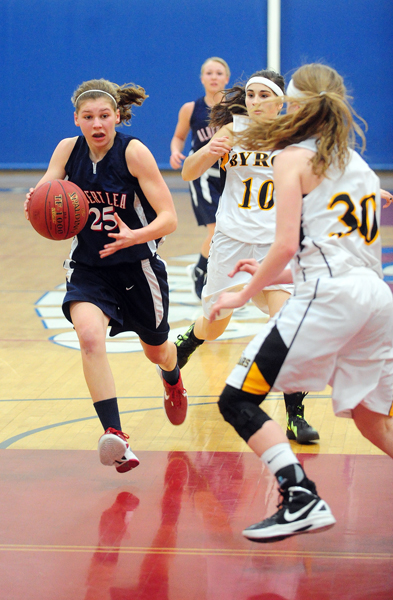 Albert Lea’s Sydney Rehnelt drives toward the hoop of Saturday during the first half of a 69-68 win over Byron. -- Andrew Dyrdal/Albert Lea Tribune

After losing a double-digit lead in the second half, Sydney Rehnelt scored a game-winning layup with 12 seconds left on Saturday to lift the Albert Lea girls’ basketball team over Byron 69-68 at Albert Lea High School.

The Tigers’ Bryn Woodside brings the ball up the floor on Saturday during the first half against Byron.

Rehnelt scored a career-high 28 points, including 20 in the first half, and made 4 of 6 3-pointers. Ashley Tewes added 15 points for the Tigers, which shot 48 percent for the game but were outscored 37-28 in the second half.

“My teammates were a big factor in it,” Rehnelt said, of her breakthrough game. “They kept getting me the ball and everybody was being positive.” 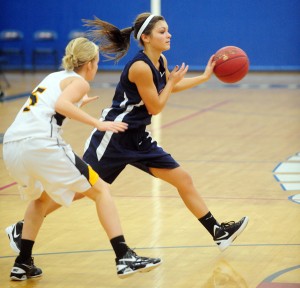 The Tigers’ Ashley Tewes throws a pass on Saturday during the first half of win over Byron. Tewes had 15 points.

The Tigers’ lead grew to 13 early in the second half, but the Bears, which had lost five of six games entering Saturday after starting the season 8-3, slowly climbed back into the game.

Rehnelt drove the baseline on the Tigers’ ensuing possession and made a floating layup to give Albert Lea the lead with 12 seconds left. The Tigers then stole the ball on defense to clinch the win.

“We all worked together really well and played good defense,” Rehnelt said. “We kept our heads up and never got down on each other.” 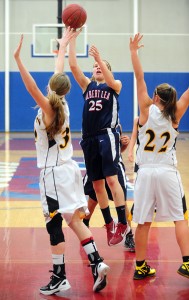 To go along with a career high in scoring, Rehnelt had eight rebounds, and Woodside had 11 points, seven steals and six assists.