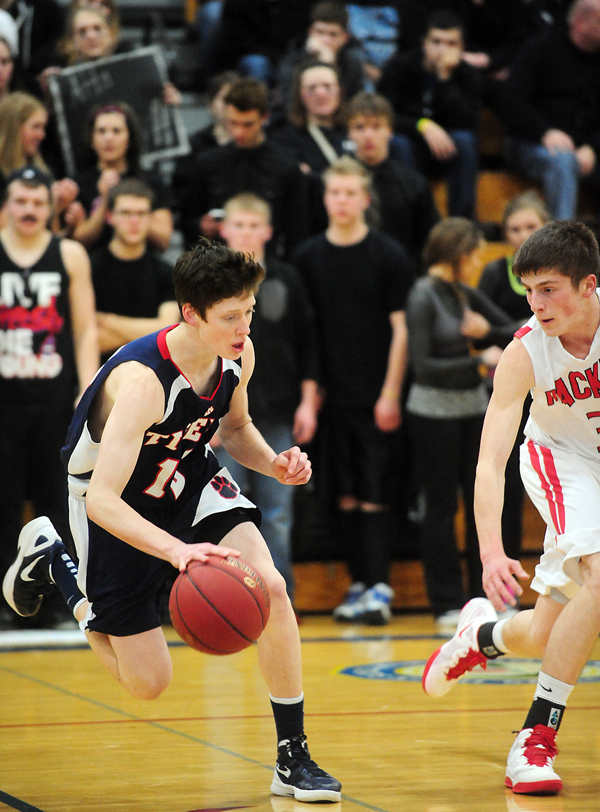 Ooms scored game’s first points against rival Austin with an up-and-under, and the Tigers forced the Packers into a turnover on its next possession.

Albert Lea’s students erupted, many covered head-to-toe in black paint, but that was all the motivation the upstart Packers needed.

Austin scored the next 25 points, including 10 from star junior Joe Aase, as it held the Tigers scoreless for 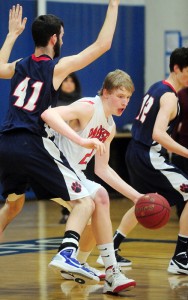 Austin junior Joe Aase, right, backs down Albert Lea’s Kyle Ooms during the first half on Tuesday night. Aase scored 19 points in the first half and finished with 25. -- Andrew Dyrdal

nearly 10 minutes and put the game away moments after it started.

In other words, a little bit of everything, as Austin (12-4, 9-2 Big Nine) scored 48 points in the first half, shot 50 percent for the game and proved why its one of the best teams in the state.

Going into the game, the Tigers (4-12, 3-7) led Section 1AAA — which it shares with Austin — in scoring but were held to a season low in points and had just seven with 5 1/2 minutes remaining in the first half until Tyler Vandenheuvel knocked down the team’s lone 3-pointer. The Packers ran a trapping, fullcourt press that transitioned into a trapping zone, keeping the Tigers’ offense out of rhythm and clanging shot after shot from behind the arc off the rim.

“Austin does a great job,” Tigers coach Lucas Kreuscher said. “You might get open looks, but even if you do, you’re not comfortable. They’re an outstanding defensive team, and they deserved to win.”

Ooms had 11 points and nine rebounds for Tigers, and Evan Templeman and Vandenheuvel each scored nine.

After the Tigers jumped out to its only lead at 2-0, Austin’s Tom Aase — Joe’s cousin — tied the game with a layup, and sophomore point guard Zach Wessels made a free throw and one of the Packers’ 12 3-pointers.

Then Joe Aase joined the party.

The 6-foot-8-inch junior scored his first points on a jump shot that pushed the Packers’ lead to 8-2 with 14 minutes left in the half. He then made back-to-back 3’s to give Austin a 23-2 lead, forcing a Tigers timeout, and made two free throws once play resumed.

“They were leaving me open, and I’m always confident to shoot it,” Aase said.

The junior then made three of five straight 3-pointers for the Packers and scored the final basket of the half — his 19th point of the game — to give Austin a 48-22 lead at the break.

“When he’s able to catch and shoot like that it’s hard to guard,” Kreuscher said. “They didn’t miss, and we couldn’t hit a thing.”

After falling behind 34-7, the Tigers outscored the Packers 15-14 over the final six minutes of the first half.

The Packers, which has won 12 straight games against the Tigers, started the second half the same way it started the game, though — red hot. Austin made three 3-pointers in the opening 3 1/2 minutes and went on a 13-2 run to go up 61-24.

The Packers’ largest lead of the game was 44.

Fadness said once the Packers took the lead early, his players had fun and the hot-shooting was contagious.

“It was footloose and fancy-free basketball,” he said. “It was just one of those nights.”