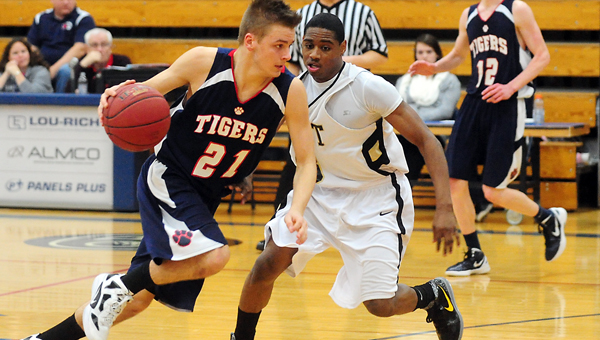 Albert Lea’s Tyler Wichmann drives toward the hoop on Thursday during the first half against Mankato East. -- Tom Jones

Albert Lea and Mankato East’s boys’ basketball teams are no slouches on offense.

So when the high-scoring, quick-firing foes met on Thursday at Albert Lea High School, it came down to whichever team could extract the most from its less-than-stellar defenses.

East did and overcame a seven-point halftime deficit to win 90-84 in a back-and-forth lightning show that lived up to its billing. 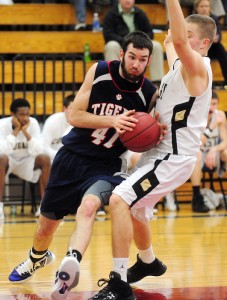 Albert Lea’s Kyle Ooms (41) drives the baseline on Thursday during the first half of a 90-84 loss to Mankato East. Ooms scored 30 points and grabbed 12 rebounds. -- Andrew Dyrdal

Heading into the game, East and Albert Lea ranked first and third, respectively, in the Big Nine Conference in scoring, and neither lost any ground when the final whistle blew. The Tigers led 50-43 at the break after the teams traded layups over the opening half’s final nine seconds.

Albert Lea’s Kyle Ooms scored a game-high 30 points, but 18 came in the first half where he scored 13 straight points— all in the paint — and looked capable of single-handedly breaking the Tigers’ three-game losing streak.

But Ooms was held to just a point over the first 13 minutes of the second half, and East outscored the Tigers 33-18 to build a 76-68 lead during that stretch and never trailed again.

“We got away from moving without the ball and getting Ooms touches,” Tigers coach Lucas Kreuscher said of the second half. “We weren’t in continuity.”

The Tigers never trailed in the first half and led by as many as nine twice when Tyler Wichmann, who finished with 15 points, made a 3-pointer to give Albert Lea a 21-12 lead, and Miles Erdman sank a hook shot to push it to 50-41.

While both teams rarely missed in a fast-paced first half, the Tigers slowly and steadily built and maintained the lead over one of the best teams in the Big Nine.

In the second half, it vanished in an instant.

Dylan See-Rockers made a layup, and Erdman converted a three-point play to tie the game at 59, before Tyler Vandenheuvel hit consecutive 3’s to give the Tigers a 65-63 lead.

The Cougars scored five straight to retake a two-point lead, but Vandenheuvel again knocked down a 3-pointer — his third straight less in than two minutes — to tie the game at 68.

East’s E.J. Haymore and Brett Olson each responded with consecutive layups to lead an 8-0 run and build a 76-68 advantage, which the Tigers could not overcome.

“We knew they were going to come out and be aggressive,” Kreuscher said. “We got away from getting things going to the rim and settled for mid-range jumpers.”

Albert Lea pulled within three of East with 1:07 remaining when See-Rockers was fouled on a layup and converted a three-point play, and again at 85-82 when Ooms scored a layup with 47 seconds left.

East scored five straight points, though, until Vandenheuvel’s layup in the final 20 seconds made the final 90-84.

“These guys are always going to compete against anybody,” said Kreuscher, of the Tigers. “They can play anybody, anywhere, and I love their competitive spirit.”

The Cougars’ win completed a season sweep of the Tigers. East beat Albert Lea 90-78 on Jan. 6.

Vandenheuvel made five 3-pointers and finished with 17 points, and Ooms had a team-high 12 rebounds. See-Rockers added 10 points, nine assists and two blocks.