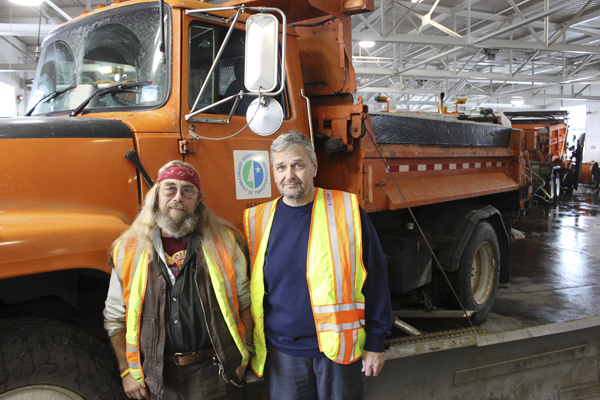 With fire extinguishers, Minnesota Department of Transportation snowplow drivers Curt Broughton, left, and Tom Johnson saved the life of a man whose pickup was on fire after he crashed into the back of a snowplow Monday. They work out of the MnDOT shop north of Albert Lea. -- Tim Engstrom/Albert Lea Tribune 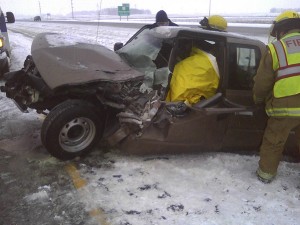 Dakota Lee is wrapped in a thermal blanket in the driver’s seat of his Chevy S10 as firefighters work to rescue him Monday. -- Minnesota Department of Transportation

If Curtis Brighten and Tom Johnson had not extinguished an engine fire of a pickup that had crashed into Brighten’s snowplow, the driver of that pickup, 20-year-old Dakota Lee, might have died from burns or been disfigured for life.

“We’re just glad the fire extinguishers worked because we’re confident that in another two or three minutes he would been screaming for his life,” Johnson said.

Instead, Lee was treated and released with scrapes and bruises from the local hospital that night.

Lee works at Quality Pork Processors in Austin. Driving his 2003 Chevy S10, he was on his way home to Fountain Street in Albert Lea. As he regularly does, he called his mother around 4 p.m. to let her know he was done with work.

When he didn’t arrive by 6 p.m., Corina Bergeson began to worry. She called his phone, and a nurse at Mayo Clinic Health System answered.

What had happened is that on Interstate 90 a mile west of the Hayward exit, Lee was headed west in the right lane while a snowplow driven by Brighten was in the left lane clearing the mix of slush and ice covering the freeway. Lee said his pickup lost traction and fishtailed as the freeway curved slightly rightward. By the time he straightened the pickup, he was in the left lane and without time to brake before the front of his truck hit the right, rear of the plow.

Brighten could feel the impact.

He could see in his mirror that the S10 spun out into the median and caught on fire. 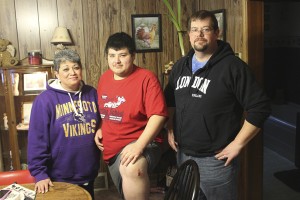 Dakota Lee, center, shows a scar on his left knee Tuesday and swelling on his leg. He stands between his mom, Corina Bergeson, and his stepdad, Tony Bergeson, in their Fountain Street home. -- Tim Engstrom/Albert Lea Tribune

He called Johnson, who was about a half mile back clearing the right lane, on the radio as he stopped the plow. He decided against backing up on the shoulder because he thought it would be faster just to get out and run. He grabbed his fire extinguisher.

Meanwhile, Johnson called the Minnesota State Patrol, stopped when he arrived at the crash, then grabbed his fire extinguisher and got out.

The dash was in Lee’s lap. He was pinned. The steering column was busted and no airbag deployed. The hood was bent up and the front of the truck was smashed. Flames were in two places: under what remained under the hood and near the windshield, right in front of Lee.

The two plow drivers pointed their extinguishers at the flames.

“We dusted the engine good with the fire extinguishers, and he was in there coughing,” Johnson said.

Lee was saved from burning but still was trapped. It would be an hour before Hayward firefighters freed him.

Johnson and Brighten told him to remain calm and breathe. A state trooper gave Lee a thermal blanket.

“He was so sorry. He felt so bad about it,” Brighten said.

Johnson, a Blooming Prairie resident who has worked for MnDOT for 32 years, said a fire in the engine compartment can be dangerous because of the possibility of an explosion.

As Lee was struggling with the pain of being trapped by the dash, Brighten, an Owatonna resident who has driven MnDOT plows for seven years, told Lee that he had been given a second chance.

“If you believe in a God, it might be a good time to talk to him,” he told Lee.

The plow drivers stayed as Lee was freed, the crash was cleaned up and the pickup towed away. They plowed car parts off the freeway.

Both said they have seen rollovers and seen people in their cars waiting for a rescue. But this was the first time they saved a life.

“Our job is to keep the roads as safe as possible,” Johnson said, “even if that means getting out.” 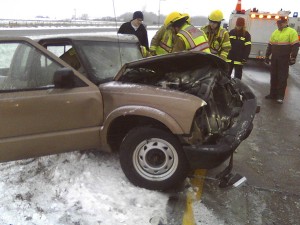 Firefighters work to rescue Dakota Lee from his wrecked pickup Monday along Interstate 90. The truck later was towed to Allen’s Tow-N-Travel in Albert Lea. -- Minnesota Department of Transportation

He said time is in such short supply to people these days. He said time can’t be an issue when driving and people should slow down, especially in inclement weather.

Lee, who goes by the name Cody rather than Dakota, said he will miss a week of work while he recovers. He said he has had headaches and his lower legs have numbness. He was hobbling around the house Tuesday. He has crutches but said he is too stubborn to use them.

Lee said he doesn’t recall much of sitting in the truck and waiting in pain to be freed, but he said he does remember the collision. He said he remembers the truck spinning after he hit the plow. He put his hands up to protect his head and noticed a passing semi. He thought he might hit it.

His mother said she is thankful to everyone who helped her son. She said Lee’s uncle is a snowplow driver, and she immediately let him know about the crash.

She said her son normally is a safe, reliable driver, compared to her other children and many young adults she knows, so it came as a surprise he would be in a crash.

Lee said the Chevy S10 had sandbags in the back but apparently not enough. He said he isn’t looking forward to getting behind the wheel.