Pickup hits snowplow on I-90 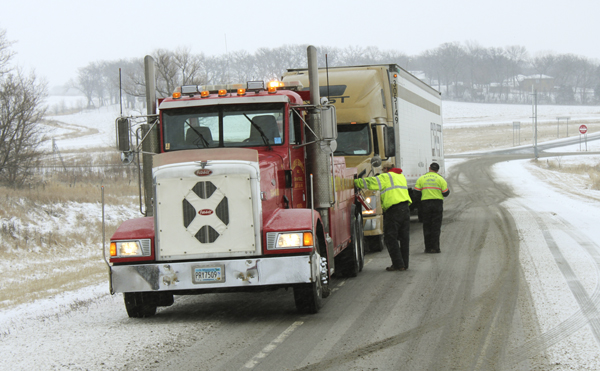 Workers with Allen’s Tow-N-Travel double-check their work Monday afternoon after pulling a CRST semi out of a ditch along the westbound on-ramp for Interstate 90 at the Bridge Avenue interchange. -- Tim Engstrom/Albert Lea Tribune

HAYWARD — A pickup rear-ended a Minnesota Department of Transportation snowplow Monday on Interstate 90.

The pickup, a 2003 Chevy S10, was driven by 20-year-old Dakota M. Lee of Albert Lea. According to the Minnesota State Patrol, the truck was headed westbound at 4:42 p.m. in the left lane about a mile west of the Hayward exit in icy road conditions when it was passed a MnDOT snowplow, only to strike the rear of another, a 1997 MnDOT snowplow driven by 57-year-old Curtis Brighten of Owatonna.

The State Patrol said Lee lost control because of the wintry weather.

Lee sustained an injury and was taken to the medical center in Albert Lea. The injury was not life-threatening.

Witness reports say the snowplow drivers extinguished a fire in the pickup.

Both drivers were wearing seat belts. The Chevy was towed to Allen’s Tow-N-Travel in Albert Lea. The snowplow was driven to the MnDOT shop on Freeborn County Road 45 north of Albert Lea.

One involved a CRST semi going into the ditch Monday afternoon in the westbound on-ramp of Interstate 90’s interchange with Bridge Avenue. CRST is a trucking company out of Cedar Rapids, Iowa. The company used to go by Cedar Rapids Steel Transport but now goes by the acronym.

Snow fell across the Albert Lea area starting at 8:45 a.m. and, with a few breaks here and there, lasting until 7 p.m. The snow turned a brown winter white again.

The high for today is expected to be 37 degrees.