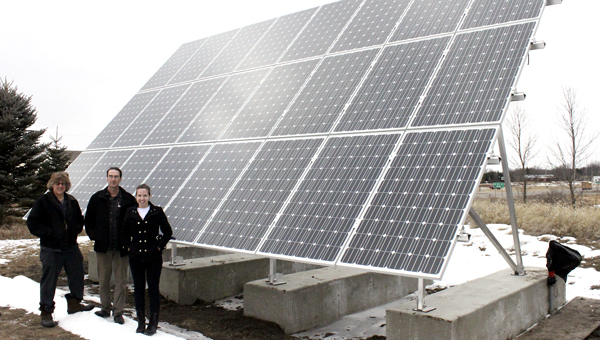 Kenny Kingstrom cannot wait to see his energy meter turn the other way.

That’s because he has installed a large solar-power array on his three-acre property along U.S. Highway 69. Instead of his meter showing only watts used, it sometimes will turn back, showing the watts generated.

But first, Alliant Energy will have to install a bidirectional meter.

It is not a solar panel. It is actually 24 solar panels, or modules, each of them 3 feet by 5 feet. The whole thing is called a solar array and is about 24 feet 7 inches by 15 feet 2 inches. There is about an inch between each panel to give the wind somewhere to go and to allow space for the material’s expansion during heat.

The solar array generates a capacity of 6 kilowatts of energy per hour, but on a cloudy day probably more like 3 kilowatts.

Cargill nightshift worker Kenny and his wife, MaChar, have three children: Natasha, 26; Alex, 24, and Hanna, 15. Alex entered the Air Force after college and didn’t spend his college savings. In 2007, he gave his father a gift.

“He told me to spend his savings on something I had always wanted to do,” Kenny said. 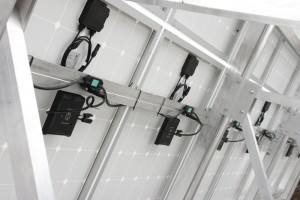 Microinverters are attached to the back of the solar panels to convert DC power to AC.

Kenny in 2004 had installed a geothermal heating and cooling system on their property at 19140 U.S. Highway 69, just south of the Albert Lea city limits. He wasn’t burning a fire to heat his house anymore. What’s next? He decided he wanted to generate electricity. There were two ways: wind or solar.

A wind turbine has to be up in the air and has several moving parts, so that presents two challenges. A solar array, however, lasts 20 to 30 years, and the hardest part is installing it. He began investigating the possibilities.

“His main intention is leaving the least footprint possible in this world,” MaChar said.

She said the motivation for her husband has never been savings. She said environmental stewardship is important for him. He was recycling before recycling programs existed.

The couple has traveled a few times to the Midwest Renewable Energy Fair in Custer, Wis., near Stevens Point, and they had an interest in the possibilities of solar stemming from those trips. And the price of solar has really dropped.

For installing the solar array, they hired Chris Gamer of St. Paul-based Innovative Power Systems Inc. He said 15 years ago — when the Kingstroms first went to the energy fair — solar power cost $30 per watt installed. Now, it’s about $5. The Kingstroms’ solar array has 250-watt modules, 24 of them. You can do the math.

Installation began in November and wrapped up in January. Brother-in-law Brad Sickenger and Cargill co-worker Kevin Levorson helped the Kingstroms with much of the hard work. Just think of concrete forms, concrete, mounting the racking systems, installing the modules, grounding, installing the big ballast blocks, connecting to the home and so forth.

And it still isn’t on. That’s going to happen in the next week or two. 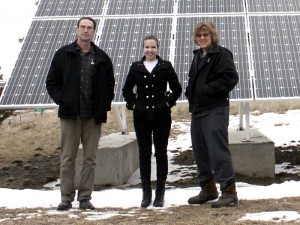 Chris Gamer, Hanna Kingstrom and Kenny Kingstrom have all played a role in the process of installing solar panels at the Kingstrom home.

Gamer said the solar equipment is assembled in Eugene, Ore., and made from Chinese parts. The glass and aluminum, however, are American.

He said each module generates DC currency. The standard method would have required the modules to generate over a set amount before converting it to AC power, which is what is sent to the power grid. That means people with solar panels often found themselves not generating power until about 10 a.m.

But the modules at the Kingstroms’ place have a new method, Gamer said. Microinverters on the back of each one convert the power to AC at a lower amplitude.

“When the sun comes up, you’re ready to produce power,” he said.

The technology comes from a California company called Enphase Energy.

Gamer said 15 years ago, people using solar power had to store power in large quantities of batteries. Now, state law allows homeowners that can generate power — be it by hydro, wind or any method — to connect to the grid without going through the long process required for, as examples, a wind farm or a coal plant. The threshold is 40 kilowatts or fewer.

It’s called the grid-tied electrical system. Instead of keeping power in batteries, homeowners who generate power add their load to the power grid.

Gamer said this actually helps power companies and their customers.

“What you are doing for them is peak-shaving,” he said.

The utility companies have to pay premium fees to acquire power during peak-usage times. The power the Kingstroms generate might not be much in the grand scheme of things, but every drop in the bucket helps. The power generated by homeowners — power that couldn’t possibly be more than the demand — flattens the peaks. It means there is power being generated that the utility companies don’t have to pay that premium fee for, lessening everyone’s costs.

Kenny had to locate a spot. He couldn’t place panels on his roof, because his house faces east and west. South is the best direction for sun. Gamer took readings on various places on his property. They got a setback variance from the county, four trees were felled, and though the garage might look close, it doesn’t cast a shadow on the array.

Through the process, Kenny has enjoyed learning. He said he is a hands-on learner.

Solar is one of the few power sources that doesn’t seek to boil water into steam — even nuclear does that. And solar is the only power source that doesn’t make something spin, like wind and dams.

The solar modules collect all visible light, plus a little more, Gamer said. They agitate electrons in the silicone, which forces a DC current.

There is a federal tax credit Kingstrom is planning to take advantage of, possibly even sell. Some power companies offer a credit, too, but not Alliant Energy.

Gamer said a typical home has a demand of 10 kilowatts per hour. Kenny said he hopes to cut his usage in half.

“I am anxious to see what happens,” Kenny said. “I want to see that meter turn backward.”