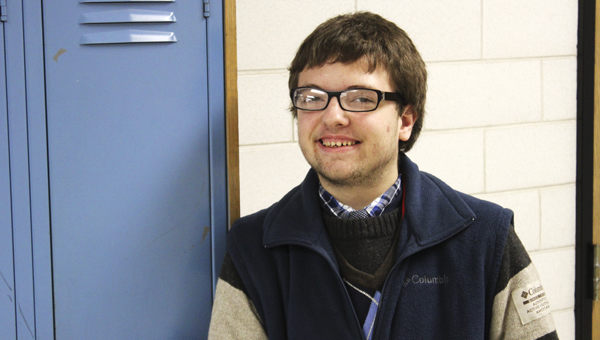 Alden-Conger High School freshman Taylor McCullough leans against his locker in the hallway of the school. He came up with an awards program for students who do good deeds. -- Tim Engstrom/Albert Lea Tribune

ALDEN — It takes only one student to combat bullying at Alden-Conger High School. Freshman Taylor McCullough.

The Alden-Conger freshman had long wanted to do something to foster a good school atmosphere, but it wasn’t until this year he got a bright idea: Why not reward students for doing good deeds instead of punishing students for doing bad deeds?

That’s why McCullough came up with an awards program for students. He went to various area businesses “about three or four weeks ago” and garnered $690 in donations like gift cards, money and other prizes.

“I just saw that there was a lot of bullying in our school,” McCullough said.

So far, the awards program has been a success, according to English teacher Therese Paczkowski.

“It’s just been amazing how people were so willing to give,” she said.

The awards program is fostering a positive climate within the school and is quite an accomplishment for McCullough, who is also on the Alden-Conger speech team.

McCullough isn’t done with the awards program, however. He and other students are planning a pizza night and movie night for students later this year, and he says there will be a whole day of activities next year designed to promote goodwill between students.

“That makes me feel really good, not to see the bullying going on anymore,” he said.