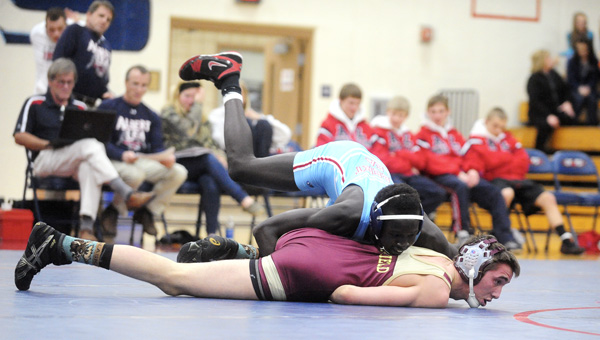 Albert Lea’s Bany Chan wrestles Northfield’s Kyle Reilly on Thursday during the opening round of the Section 1AAA Tournament at Albert Lea High School. The Tigers notched nine pins and cruised to a 69-7 win over the Raiders. -- Brandi Hagen

The Albert Lea wrestling team started and finished quickly on Thursday in the quarterfinals of the Section 1AAA Tournament.

The second-seeded and fifth-ranked Tigers (20-3) recorded first-period pins in the opening four weight classes against No. 7 Northfield (7-16) and five pins over the final seven at Albert Lea High School.

“I thought as a team for the first round we wrestled great,” Tigers coach Larry Goodnature said. “I was really happy with the way we wrestled being aggressive and getting those bonus points. That’s what we got to do for this tournament. You’ve got to have bonus points, that’s what wins duals, and we went after it tonight.”

The Tigers’ Beau Johnsrud (106 pounds), Dakota Wangsness (120) and Lucas Hansen (126) each pinned their opponents in under one minute, and Garrett Wangsness pinned Bryce Rippentrop in 1:40.

The Tigers will next wrestle in a rematch with Big Nine Conference rival Owatonna. Albert Lea beat the Huskies 31-30 on Dec. 15, 2010, in a come-from-behind thriller in Owatonna.

“They’re going to be great high school wrestling duals,” said Goodnature, noting the Tigers first have to beat the Huskies before moving to the finals. “We’re at full strength now, and we’re healthy so I’m confident and we just got to out there, wrestle the match and see what happens.”

The Tigers will also wrestle in the individual section tournament on Feb. 24-25, and Goodnature said that’s one of the great things about the sport.

“We’re going to compete as a team and have a lot of fun, but if it don’t work out for us we turnaround the next week and go at a whole separate tournament,” he said. “They can still go to state as individuals and that’s the unique thing about wrestling.”