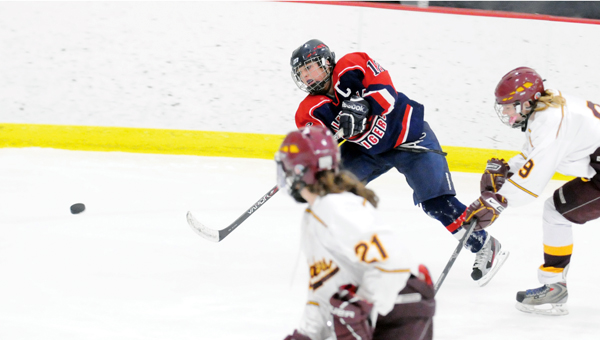 The Albert Lea girls’ hockey team’s season ended on Wednesday with a 5-2 loss to Northfield in the quarterfinals of the Section 1A Tournament at Northfield Ice Arena.

Mariah Leach and Megan Pulley each scored power-play goals for the Tigers, which outshot the Raiders 28-26 but was unable to capitalize on the Raiders’ seven penalties, including one five-minute major for checking from behind. 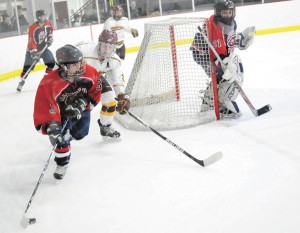 Albert Lea senior Mariah Leach controls the puck from behind the net on Wednesday night during a season-ending 5-2 loss to Northfield in the Section 1A quarterfinals at Northfield Ice Arena. Leach had a goal and an assist during the game. -- Shane Kitzman/Northfield News

Annie Pumper, who also had three assists, scored a power-play goal at 4:28 to give Northfield a 1-0 lead.

The No. 3-seeded Raiders killed a penalty at 6:36, and Maggie Cloud scored at 12:47 to give Northfield a two-goal lead at the first intermission. The No. 6 Tigers were outshot 11-6 in the opening period.

The Raiders’ Sarah Behr scored 1:15 in the second period, and Aleisha Bielenberg scored at 10:56 to push the lead to 4-0.

The Raiders received a minor penalty at 13:45, and Pulley scored 25 seconds later off an assist from Leach. The Tigers outshot the Raiders 9-5 in the second.

Leach pulled Albert Lea within two with a goal 45 seconds into the third period off an assist from senior Natasha Moyer, but the Tigers couldn’t score on an ensuing 5 on 3 advantage, which included a five-minute power play after Northfield’s Laine Fischer received a major penalty for checking from behind.

Albert Lea pulled its goalie, Katie Schwarz, for the final minute, and the Raiders’ Cassie Thomas scored an empty-netter with 31 seconds remaining.

The Raiders will face No. 2-seeded New Prague in the section semifinals on Saturday.